Home News & Opinion Development Behold! A look at the most expensive Georgia government building ever 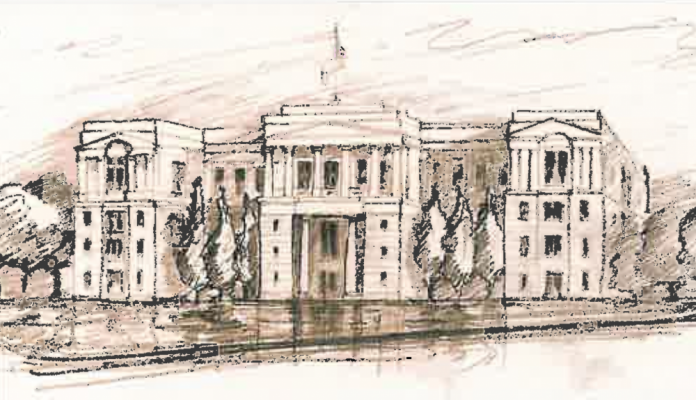 If Gov. Nathan Deal has his way, Georgia’s judicial branch will be bigger and better funded when he leaves office in January 2019. He recently expanded the state Court of Appeals from 12 to 15 judges, and now wants to add two more justices to the Georgia Supreme Court. But his biggest gift to the state’s highest courts could come in the form of a new building slated to be among priciest construction projects in the state’s history. Brand-new renderings reveal what the structure might look like.

One block south of the Gold Dome, the Georgia Building Authority plans to raze the former Georgia Archives building—the windowless structure that resembles a concrete block overlooking the Downtown Connector—and replace it with a new judicial complex. The project is projected to cost north of $110 million, making it the most expensive government building in state history—excluding the Georgia Dome. (Though the construction of the Gold Dome only cost $999,881.57 in 1889—which translates to $28.4 million when factoring in 127 years of inflation—one insurance estimate places the replacement cost at about $260 million.)

Two years ago, Deal pushed the project into motion when he tucked $7.3 million into the state budget for the building’s design and site preparations. The money for the project, which is being funded through 20-year bonds, could cost up to $13 million with interest. Additional funding for demolition, as well as the construction itself, has yet to be approved.

So, what might it look like? Based on renderings obtained through an open records request, the project is by all accounts massive. Standing at the Southeast corner of Memorial Drive and Capitol Avenue, the nearly 200,000-square-foot structure will boast a sleek exterior with classical Greek columns, making it look more like a traditional courthouse than the Georgia Supreme Court’s somewhat nondescript current home. The plan calls for the new building to stand five or six stories tall—depending on which design is chosen—with the Georgia Supreme Court located on the top floor. The plan lays out space for 24 judge’s chambers and offices for eventually up to 275 staffers.

“We’re planning this from the inside out,” said Marvin Woodward, GBA’s deputy state property officer. “It’s a large building and it requires a lot of thought.”

After considering five finalists, the Georgia Building Authority selected a proposal from architects Stevens & Wilkinson—an Atlanta-based firm that recently completed Liberty Plaza on the east side of the state capital—and Robert A. M. Stern, a New York-based group that designed the Federal Reserve Bank of Atlanta, the University of Georgia’s proposed $42 million business school building, and a number of federal courthouses across the country. The losing finalists included Wakefield, Beasley, and Associates; Pieper O’Brien Herr Architects; HOK; and HKS.

“[The new court complex] should be both prominent and iconic,” said the Stevens & Wilkinson proposal submitted last month. “One of the deficiencies of the existing judicial building is that it is similar to many other state office buildings.”

Over the next month, the GBA intends to vet the plan submitted by the joint venture. When state officials are finished, Woodward explained, they’ll spent “two to three” months with the firm finalizing a preliminary design concept that would then be presented to lawmakers. In the mean time, the GBA has requested $6.5 million in the upcoming state budget to demolish the former archives building.

Once they find demolition funding, the GBA will then seek funds to move forward with construction, potentially during the 2017 legislative session. Woodward, who estimates a two-year construction timeline, said the earliest the building could be completed would be in summer 2019.

What might push things ahead of schedule? Gov. Deal. The governor’s office is currently putting together what is expected to be the biggest annual state budget ever at more than $23 billion. As the project’s biggest backer, he could squeeze more cash for one of his biggest legacy projects into this year’s budget, which would speed up the project’s timeline. Deal spokeswoman Jen Talaber said only that “the governor hasn’t submitted his budget yet,” but his spending plan is expected sometime later this week.

Check out renderings of from Stevens & Wilkinson—plus those from some of the other finalists—in the gallery below.