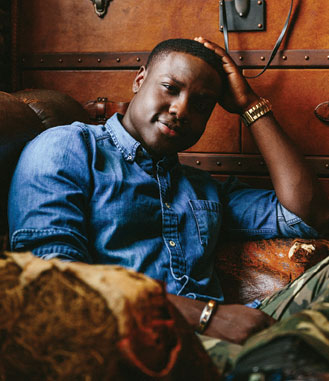 If you’ve seen Dayo Okeniyi’s turn as beyond-buff Thresh in last year’s adaptation of The Hunger Games, you won’t be surprised that, when I ask if he’ll split an order of dumplings at RA Sushi in Midtown, he asks if they’re steamed. But you might be surprised at his response when I explain that, regrettably, they aren’t, and wonder, is he on a diet?

“Oh, hell no,” he laughs. “I’m not one of those actors; I can keep the six-pack in the cooler, thank you very much. You wanna hire that guy? Get Taye Diggs. You need the fat African kid? Holler at me.”

With his self-deprecation and candor, Okeniyi, twenty-five, comes off as a Hollywood rookie—albeit one on the rise. After his breakout Hunger Games role, Okeniyi appeared in Sundance darling The Spectacular Now before acting alongside Justin Timberlake and Ben Affleck in the crime thriller Runner, Runner (out this month). In February, he’ll star in a remake of the teen-romance weepie Endless Love, filmed this summer in Atlanta, the city where his family has lived since 2009.

Shooting here was a chance for Okeniyi to explore the city he calls home but hasn’t really lived in. Filming took him to landmarks such as Zoo Atlanta, and his real-life mom, Elizabeth, even scored a cameo as his on-screen mother. The day we met, Okeniyi was headed to Six Flags with childhood friends.

Born in Nigeria, Okeniyi acted in plays and loved theater as a child, but hit pause on that passion when his family moved to the U.S. in 2003. Six years later, after earning a degree in visual communication from Anderson University in Indiana and a job offer from a Nigerian firm, he moved to Los Angeles instead. “My parents were like, ‘We’re going to give you a year. If nothing happens, call and beg for that job,’” he says.

As it turned out, a year was about all the time Okeniyi would need. He walked into his Hunger Games audition and nabbed the role in one meeting. While he may not use his degree professionally, his studious dedication to the craft of acting endears him to casting directors, some of whom have given him roles originally scripted for entirely different actors. His Spectacular Now character, Marcus, for example, was written as a “Caucasian All-American” quarterback. “But I loved the script, and my team and I just went into the room fighting for it,” he says.