Home News & Opinion From the Magazine Does Georgia need to tighten the leash on exotic animals?

Fred Boyajian’s ranch house in Buckhead is unremarkable in every way except for what he keeps in his backyard, locked behind a pair of gates: two Canadian lynx, two Eurasian lynx, two caracals, two servals, and a bobcat. One afternoon last December, 21-year-old Rachel Hightower arrived with a friend to help feed the felines. Against protocol, Hightower lifted a latch and entered a lynx’s cage that, like the others, had no lock. In a few minutes, the cat went from playful to aggressive, clawing her scalp and biting her right arm. Her friend called 911, and Hightower ended up being treated for minor injuries at Grady Memorial Hospital. The caretaker who’d arranged for Hightower to feed the animals, without Boyajian’s knowledge, was fired.

Boyajian’s cats had caused a stir before. In 2004 one of his lynx, Sasquatch, was on the loose for a week after a fallen tree damaged its pen, worrying his neighbors. The cat was eventually found a few houses down the block—about a mile from the Governor’s Mansion. Two years later, a serval, a medium-sized wild cat from the African savanna that resembles a cheetah, also escaped from its pen. Eight months before Hightower was attacked, a federal inspector flagged Boyajian for not having a six-foot-high perimeter fence around the wild cat enclosure. The 70-year-old Boyajian, a self-described conservationist who can be seen cuddling with his cats in online photos, has fought efforts by the city of Atlanta to clamp down on his breeding operation. He successfully sued the city to keep his wild cats in his backyard by arguing that Atlanta officials had approved the plans for his cage compound.

Despite dozens of written complaints from neighbors over the years, Boyajian’s permit has been reissued by state and federal inspectors every year since 1977. Indeed, small-scale breeders like Boyajian, who declined to comment for this story, operate under the same one-size-fits-all permit that governs Zoo Atlanta and Georgia Aquarium. Applicants must first pass an inspection conducted by the U.S. Department of Agriculture before paying a $236 fee to file for a state permit. Finally, the Georgia Department of Natural Resources inspects the facility to ensure proper security precautions are in place to protect the public, along with adequate safety measures for the animals.

The permitting process is “kind of convoluted,” says Lieutenant Wayne Hubbard, who heads the DNR division responsible for deciding who can own an exotic animal. As of this past September, there were about 80 enterprises licensed by the state to keep wild animals in Georgia, ranging from research institutions like Yerkes National Primate Research Center at Emory University to entertainment venues like Medieval Times in Lawrenceville to petting zoos like Pettit Creek Farms in Cartersville. To stay in business, permit holders must pass annual DNR inspections, submit to spot checks, and hold liability insurance if their animals are deemed dangerous. Keepers of exotic animals must also submit to periodic unannounced USDA inspections.

“You can’t have them as a pet, and you can’t keep them in your home,” Hubbard says over the phone from his office in Social Circle. “But like any laws or regulations, people bend them, and an exotic animal can become a pet when we’re not looking.”

In 1999, when an injury forced one-time Fulton County cop Dale Arrowood to find a new profession, the Sharpsburg resident decided to invest in thick leather gloves to pursue the falconry dreams of his childhood. Now he tends to more than a dozen exotic birds of prey on his five-acre lot, and has given educational “Winged Ambassadors” presentations with his saker falcon, red-shouldered hawk, and Eurasian eagle owl at resorts like Callaway Gardens and Historic Banning Mills. According to Arrowood, the series of wooden cages he’s installed for his birds go far beyond what’s required by the state in terms of size, sturdiness, and design features.

While Arrowood seeks to educate people about his birds—black vultures, he explains, help prevent the spread of diseases by eating dead animals—other exotic animal owners shun public attention. Nancy Barter has kept Siberian lynx and servals—her “kitties,” as she calls them—on her nearly three-acre property at the end of a quiet Alpharetta cul-de-sac since the late 1990s. While refusing to discuss her breeding business—to avoid being misrepresented in the media, she says—Barter volunteers her belief that state laws for “harmless” and “exquisite” cats like hers are unfairly restrictive compared with the laxer regulations for pit bulls, which she considers dangerous. Nevertheless, she submits to the required yearly inspections, she says, to allow her to protect her cats from becoming extinct—although all are listed as non-threatened species.

Are Georgia’s ownership laws of exotic animals too permissive? Brittany Peet, PETA’s deputy director of captive animal law enforcement, thinks so. Allowing wild animals to be kept privately in populated areas like metro Atlanta without stricter oversight is a major problem, she says.

Peet cites Chestatee Wildlife Preserve—a 25-acre private zoo east of Dahlonega that’s home to a Barbary lion, a white tiger, and a zebra-donkey hybrid known as a “zedonk,” among others—as emblematic of the problems with Georgia’s permitting system. After a PETA activist posed as a volunteer to document the treatment of animals, the advocacy group filed a complaint with the USDA and alleged a chimpanzee named Iris was left alone in a dark cell for six weeks during the winter following the natural deaths of her companions at the preserve.

“She was despondent, lonely, and bored,” Peet says. “She painted her own feces on the walls of her cell, a sign of psychological distress.” Last March the chimp was transferred to a sanctuary in Florida.

When reached by phone, Chestatee owner C.W. Wathen, who founded the preserve in 1992, said the organization’s complaints do not accurately portray what happened, before hanging up.

Kathy Bowman of Stockbridge became an exotic animal owner two years ago, after her nursing career ended when she severed two fingers in a home renovation accident. On a recent morning, Bowman opens a chain-link fence and walks past several horses, a goat, and some dogs to reach the shed where, until recently, she bred exotic hedgehogs. The building is now home to a collection of sugar gliders, fist-sized Australian marsupials with black marble eyes that sleep during the day and can sail across a room like a flying squirrel.

As the lights flicker on, the high-pitched barks of 60 sugar gliders fill the room. Inside the black metal cages that line the walls are soft pouches for sleeping and bowls of food prepared in Bowman’s own kitchen. “It’s a seven-day-a-week commitment,” she says.

Bowman, who plans to move soon to a smaller residence, has arranged for a local exotic animal dealer to take her sugar gliders. Although she believes they’ll be in good hands, she worries about them receiving the same care and attention she now provides.

“I’m going to miss all these,” she says. 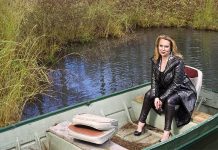