Home News & Opinion Politics Everything you need to know about the 2017 Atlanta City Council races... 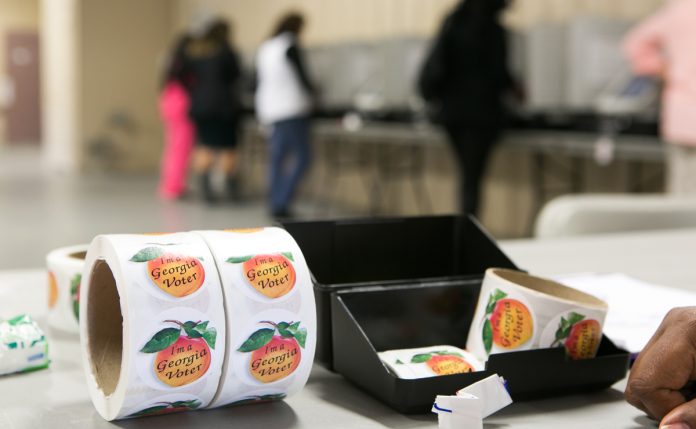 First, if you don’t know your city council district, enter your address here to find out.

Now get up to speed on what’s happening in each race, plus the races for the at-large posts and council president:

District 1: includes Grant Park, Ormewood Park, Benteen Heights, and much of southeast Atlanta
Candidates: Ron Aribo, Mo Ivory, Oz Hill, Bill Powell, Carla Smith
What’s at stake: Smith, who’s been in office since 2004, has a reputation for being a community-focused council member who’ll answer your 1 a.m. phone call and help clean graffiti off that wall. But she’s facing criticism over a city plan to remove 75 trees in Grant Park for a zoo parking deck. Smith has a particularly tough challenger in lawyer and former radio personality Ivory, who’s raised more money than all the other candidates combined. The district has seen a rise in home prices and Atlanta BeltLine-driven development, but still faces challenges with public safety.

District 2: includes Inman Park, the Old Fourth Ward, Candler Park, and a chunk of eastern downtown
Candidates: Amir Farokhi, Stephon Ferguson, Zelda Jackson, Nick Mulkey, Lauren Welsh
What’s at stake: The race for Kwanza Hall’s open seat would seem to come down to the two candidates able to have raised significant cash: Farokhi, a lawyer turned nonprofit head and consultant, enjoys name recognition from a previous council run, while Welsh works in marketing and is a long-serving Neighborhood Planning Unit chair. The district, which includes Krog Street and Ponce City markets, as well as the BeltLine’s popular Eastside Trail, has become one of the most vibrant—and expensive—in recent years.

District 3: includes Vine City, Georgia Tech, Atlantic Station, Bankhead, and a strip of west Atlanta
Candidates: Ricky Brown, Greg Clay, Ivory Young
What’s at stake: Some of the biggest changes in town are taking place in District 3, with the completion of Mercedes-Benz Stadium, the building of Rodney Cook Sr. Park, and the launch of the Westside Future Fund and other programs that will spend tens of millions on schools, job training, and housing. Young, a sincere, workaholic council member now in his fourth term, faces a vigorous contest from Clay, a business consultant and educational advocate who wants to see better cooperation between City Hall and Atlanta Public Schools. The main challenge is bringing development and opportunity to a long-blighted part of town while also preventing displacement.

District 4: includes the West End, Atlanta University center, Venetian Hills, and a slice of west downtown
Candidates: Adassa, Christopher Brown, Daniel Burroughs, Jason Dozier, Kimberly Parmer, Shawn Walton, DeBorah “Sister” Williams, Cleta Winslow
What’s at stake: After years of sitting ignored by developers and being walloped by the housing crash, the district has largely recovered and is starting to see new investment due to the BeltLine’s Westside Trail and renewed attention on its attractive housing stock. The 24-year council veteran Winslow faces a horde of opponents, but some observers are betting that military veteran’s advocate Dozier, whose campaign war chest is larger than the seven other candidates combined, could force her into a runoff.

District 5: includes Cabbagetown, Reynoldstown, Edgewood, East Lake, and East Atlanta
Candidates: Natalyn Archibong, Liliana Bakhtiari
What’s at stake: Another four-termer, Archibong is facing a stiff challenge from Bakhtiari, an openly queer Muslim millennial with a background in nonprofits and social advocacy. The district has been the scene of swift gentrification and a recent influx of commercial redevelopment along the Memorial Drive corridor, so the focus of voters will likely be on affordable housing and managed growth.

District 6: includes Virginia-Highland, Morningside, Ansley Park, and Druid Hills
Candidates: Jennifer Ide, Kirk Rich
What’s at stake: Some of Atlanta’s priciest neighborhoods are located in this district—whose seat is open courtesy of Councilman Alex Wan, who’s running for council president—so voters here tend to be most concerned with quality-of-life issues such as traffic congestion, zoning, and infrastructure improvements. Ide is an attorney for a nonprofit and Rich is a real estate executive who serves on the board of Invest Atlanta, the city’s development authority.

District 7: includes eastern Buckhead, Garden Hills, and Atlanta’s northeast corner
Candidates: Howard Shook, Rebecca King
What’s at stake: District 7 already boasted many of the city’s top shopping destinations, swanky hotels, and high-end condos. But the Buckhead Atlanta retail district has helped ignite a residential building boom along Peachtree Road that could add to the area’s traffic woes. Still, four-term incumbent Shook, the only council candidate in any race to have raised more than $200,000, doesn’t appear in danger from King, a small business owner and a board member of Livable Buckhead, a community planning nonprofit.

District 8: includes Chastain Park, Tuxedo Park, Paces, western Buckhead and Atlanta’s northwest corner
Candidates: J.P. Matzigkeit, Anna Tillman
What’s at stake: The district seat made open by the retiring Yolanda Adrean would represent the city’s most well-heeled homeowners. Traffic, public safety, and reforming City Hall in light of the ongoing bribery scandal appear to be the top priorities in the race between Matzigkeit, a corporate finance officer, and Tillman, a semi-retired geologist and executive.

District 9: includes Riverside, Bolton, Carver Hills, and much of Westside Atlanta
Candidates: Kwame Abernathy, William Harrison, Dustin Hillis
What’s at stake: This long-disadvantaged district is just beginning to see new residential development in some quarters, but should see more activity as the Proctor Creek Trail, the BeltLine’s northwest segment, and Westside Reservoir Park—the ambitious greenspace centered on the abandoned Bellwood Quarry—move closer to fruition. The race appears to be between Hillis, a former aide to Councilwoman Felicia Moore, who’s vacating the seat to run for council president, and the youngest son of civil rights leader Ralph David Abernathy. Abernathy, who describes himself as “unemployed,” has so far failed to file any of the required campaign disclosures.

District 10: includes Westview, Audobon Forest, Bakers Ferry and a swath of west Atlanta
Candidates: Andrea Boone, Kenny Hill, Beverly Rice
What’s at stake: Boone was the long-time chief of staff for Councilman C.T. Martin—also running for council president—before becoming commissioner of Mayor Reed’s Office of Constituent Services, and might seem to have the edge in the race to represent a relatively low-income, largely African American section of town. However, Hill, who retired after 30 years with Home Depot to found a nonprofit to provide job training to the homeless, is also leading a strong campaign. The focus will likely be on economic development and public safety.

At-Large Post 1: City-wide
Candidates: Michael Bond, Courtney English
What’s at stake: Bond, who’s served a total of four terms on the council over the past 24 years, appears to be in real danger of losing his seat to the Atlanta Board of Education chairman. Not only has English raised twice as much campaign cash, he carries endorsements from ex-Mayor Shirley Franklin and Bond’s council colleague Andre Dickens. Bond’s political career, meanwhile, is still reeling from a series of ethics violations—including spending public funds on personal travel, accepting free tickets, and failing to disclose hundreds of campaign donations and expenses—that resulted in $15,000 in city fine and a whopping $45,000 from the state Ethics Commission, the largest of its kind ever assessed.

At-Large Post 2: City-wide
Candidates: Cory Ruth, Matt Westmoreland, Bret R. Williams
What’s at stake: With incumbent Mary Norwood running for mayor, this seat is up for grabs—and Westmoreland, the Ivy League-educated APS board member, appears well-positioned to grab it. The son of a former Fulton County Superior Court judge and one of the top fundraisers in any council race, the 29-year-old Westmoreland carries the blessing of Congressman John Lewis and endorsements from the police and fire unions, as well as major business and civic groups.

At-Large Post 3: City-wide
Candidates: Andre Dickens
What’s at stake: Nothing much to report here. Council freshman Dickens is the only city official to go unchallenged.

City Council President: City-wide
Candidates: C.T. Martin, Felicia Moore, Alex Wan
What’s at stake: Actually, not a great deal. The president’s only official duties are to hand out committee assignments, lead council meetings, and to break tie votes. The post has never been a stepping stone to higher office, but the president is well-positioned to be an opinion leader or push back against mayoral overreach. This race is between three council members: Martin, who’s sparred with past mayors (and sometimes colleagues) but has been a floor leader for Reed; Moore, the council’s most vocal watchdog and reliable “no” vote; and Wan, who has more of an easy-going, collaborative style.

Your top 10 questions about voting absentee in Georgia, answered