Home News & Opinion Arts & Events Get ready for CardboardCon: How to turn a box into a superhero...

If you’ve taken in the spectacle of a sci-fi convention like Dragon Con, you might presume that all cosplay requires spandex, corsetry, and/or complicated wiring. But things are decidedly more low-tech at CardboardCon, which is “dedicated to the art of cardboard costuming.” How exactly does one transform a box into a superhero? Some, like CardboardCon founder Drew Duncan, find cartons at liquor stores and assemble costumes piecemeal. But Stephen “Cap” Larkworthy, the man behind Atlanta’s popular Box Heroes, fabricates his cartons from scratch. He’s created more than 60 superhero costumes since 2009 (his favorites: Falcon, Batman, Hawkman). How he does it: 1 Start with two to three pristine four-by-eight sheets of cardboard. Assemble the pieces like armor (lower leg, thigh, torso, etc.). Keep it simple—geometric shapes are easy—but don’t be afraid to sculpt specific pieces with an X-Acto knife if you need curves. 2 Attach the pieces to each other. Score the fold lines and glue a tab into place, then apply hot glue to the scored areas before pressing the sheets together. Use tape where necessary (but paint doesn’t stick well to it, so reserve for emergencies only). 3 It’s time to start painting. Use interior latex paint. Again, keep it simple; most costumes only have a one- or two-tone base. 4 Once the paint is dry, add your detailing lines with a smaller brush. Use black to really make those base colors pop.

On the calendar: CardboardCon, a sci-fi/fantasy convention, includes a costume parade and panels. March 7. cardboardcon.com

This article originally appeared in our March 2015 issue under the headline “Think inside the box.” 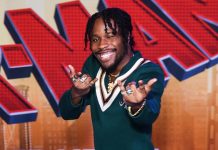 Spider-Man: Into the Spider-Verse star and Atlanta native Shameik Moore is one to watch 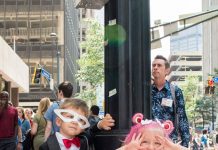 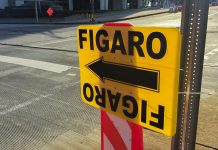