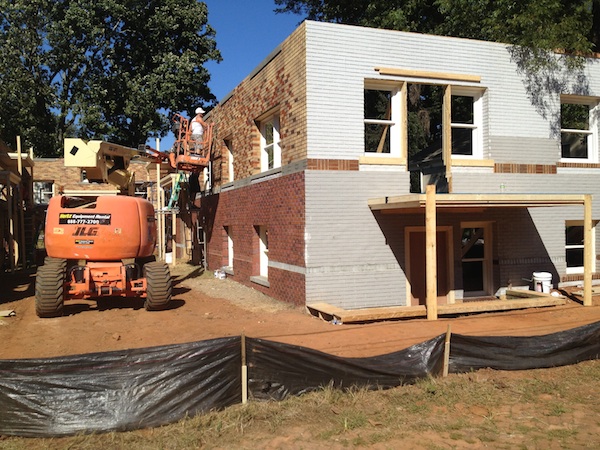 At some point, I suppose, it will stop being a surprise that movie folks ask Atlanta to stand in for so many other places. Odd enough that Woodruff Park was a facsimile of seventies-era NYC complete with overflowing garbage cans and yellow cabs for Anchorman 2. But today, while strolling around our neighborhood, my husband and I came across a crew hard at work constructing a faux Rhode Island streetscape on a long-vacant lot at the corner of Kirkwood Avenue and Pearl Street in Cabbagetown, about the most quintessentially Southern pocket of Atlanta you could hope for.

It may seem baffling that with so many empty buildings strewn across the metro area a producer would deem it cheaper to build a fake Yankee alleyway than gussy up existing structures. Not that a lot’s being invested in this building site. “This is not going to withstand a hurricane,” said one carpenter when asked if there were any permanent plans for the job he was working on. According to the neighborhood rumor mill, the stuff will be torn down after filming. On the plus side, the film crew cleared weeds and brush that made the lot an eyesore and its adjacent sidewalks impassable for months. Thanks, Hollywood, for the community service!

Cabbagetown is one of the locations for Dumb and Dumber To (yes, it’s spelled that way), the oft-delayed sequel to the 1994 Jim Carrey/Jeff Daniels below-lowbrow comedy Dumb and Dumber, brought to the world by the Farrelly brothers. This is actually the third of a trilogy, although I suspect the Farrellys, and everyone else—audiences included—would just as soon pretend that the 2003 prequel Dumb and Dumberer, which Carrey and Daniels wisely skipped, never happened.

Production on D&D To started this month, with filming scheduled for Atlanta locations and in Grantville, Georgia, which is standing in for small town Kansas. In addition to Carrey and Daniels, the movie will star Kathleen Turner. (Aside: much as I am tired of hearing about celebs making appearances at the Clermont Lounge, after this week’s Mumford and Sons dustup, I’m kind of rooting for a Blondie/Turner catfight.)

Filming at Pearl Street spot is scheduled for the week of September 23. I’ll let you know of any Carrey sightings in Cabbagetown.