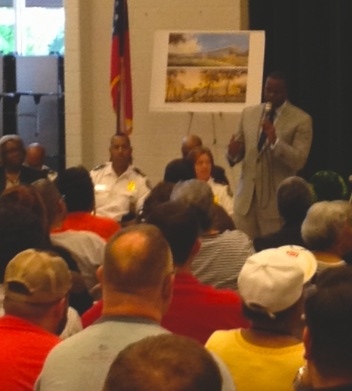 Good thing there were so many cops at hand for Monday’s meeting at Drew Charter School in East Lake: the parking lot was packed and more than a few drivers grew testy as they circled looking for spots.

The meeting was the first of three town hall forums organized by the mayor’s office in response to a crime spike in southeast and southwest Atlanta. Overall, the city’s crime rate is flat, indeed down in some areas. But the south and east sides of town are experiencing a surge in armed robberies, burglaries, and auto thefts. In Zone 6, which includes much of the Eastside, burglary is up 67 percent year to date, and robbery up 34 percent.

“I’ve lived here for thirty-five years and have not seen it like this,” said Natalyn Mosby Archibong, whose Atlanta City Council district includes East Lake, East Atlanta, Reynoldstown and other neighborhoods where a number of armed robberies—of which at least one resulted in homicide—have occurred. “This is a turning point for us,” she said.

Archibong turned the meeting over to Atlanta Police Department chief George Turner and mayor Kasim Reed. “The nature of the violence has shaken the confidence of this neighborhood,” said the mayor. “I don’t want to hide behind statistics.”

Hizzoner was in prime form, tossing aside his sheaf of talking points, and taking questions from the audience for more than an hour. He assured one woman that his staff would help her find after-school programs for her kids; he asked another to give him the names of stores that she claimed are re-selling purloined iPhones. When a man says he works getting kids out of gangs, but doesn’t know where to take them, Reed said, “Bring them to me.”

The forum was long on dialog and short on specifics, although Reed and Turner both stressed that APD has its biggest force in history, and that more cops have been assigned to the southeast part of town without taking them off beats elsewhere.

And, as he’s done frequently, the mayor cited his beef with a court system that releases repeat offenders after they have served little or no jail time. The Tru Tv reality show Bait Car, in which specially equipped cars are used to entrap auto thieves, filmed only one season in Atlanta, he said. The producers explained that they wouldn’t come back to Atlanta. While here, they would trap thieves only to have the same perpetrators show up and steal the cars again. “They couldn’t use the footage,” the mayor noted.

The next town hall meetings are scheduled for: