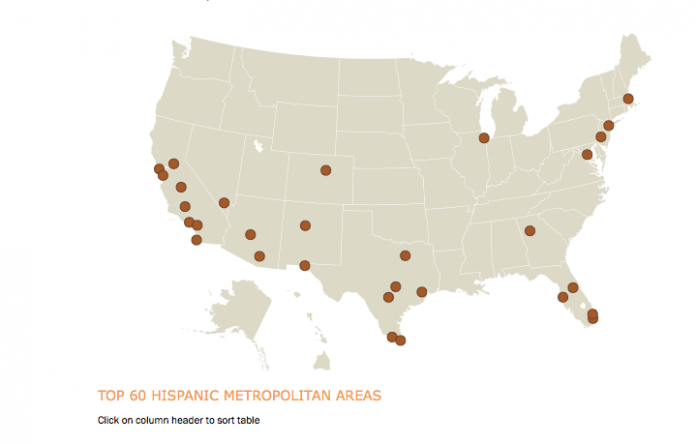 The numbers crunchers at Pew have a new report—with nifty interactive maps—that analyzes the U.S. Hispanic population by state and metro area. In short, the project shows that although Hispanics still cluster in a few areas (nine percent of the nation’s Hispanic population is in the Los Angeles metro area, for example) over the past decade, Hispanics are moving to other parts of the country.

According to the Pew analysis, metro Atlanta ranks nineteen among the sixty largest metro areas for total Hispanic population—the 546,000 Hispanics who live here represent eleven percent of metro residents, and more than half of the Hispanics in Georgia (880,000). Our state ranks tenth in the nation for fastest growing Hispanic population, with a 103 percent change between 2001 and 2011.

Atlanta is known for our historic black-white power structure and distinctive biracial civic cooperation. As the metro area—and Georgia as a whole—becomes even more diverse, those patterns will need to shift. If I were running for statewide office here, I’d certainly brush up on my Spanish. On that note, if anyone wants to confirm that Kasim Reed has goals beyond City Hall, the best evidence would be finding Rosetta Stone apps on his iPhone.