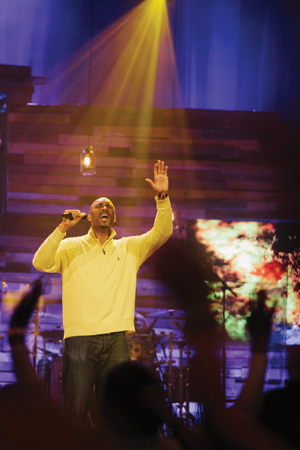 On a drab Saturday evening inside the 1,500-seat auditorium of Victory World Church in Gwinnett County, a boom-mounted camera sweeps the crowd. Six screens glow blue above the stage, each ticking with a countdown clock. Finally the lights dim, the crowd rises and sways, and a towering figure in a checkered cardigan and baggy leather pants takes center stage, flanked by four singers, four guitarists, a drummer, and a keyboardist. Behind him is a massive white cross, built of wavy tiles.

The spirited scene bears contrast to late 2010. Back then, with seven albums and five number one Billboard singles behind him, the nineties R&B sensation was wading through the nadir of his career. In Arizona for a well-promoted show at a 3,000-seat venue, Jordan strode onstage to learn only seven people had come. He bit the bullet and performed his full hour, watching those seven dancing diehards and thinking, I love something that no longer loves me back. The next month, Jordan announced his retirement on Twitter, proposing one last show for New Year’s Eve, during which his ear-wormy megahit “This Is How We Do It” would be ceremoniously put out to pasture. Nobody called.

Jordan now considers that silence a powerful nudge from God. The amicable Snellville resident and father of four is formulating plans for a late-summer tour with Victory World Music, the team behind his first religious album, Shake Heaven, which charted in Billboard’s Christian/gospel top ten after its December release. Outside of music, Jordan maintains a full-time job as one of the church’s pastoral team; he also conducts marriage counseling with his wife of eighteen years, Kristin. As an ordained minister, he can “marry, bury, and dip” believers, he laughs.

The path from pop culture to the pulpit is so well trod the switch can seem disingenuous, but colleagues say Jordan is committed to this multicultural congregation of 11,000. “You have to understand Montell is driven to be the best at anything he does,” says Olin Holly, executive pastor of ministries. And, Holly notes, having a multi-platinum-selling artist on the pastoral payroll “dramatically transformed our worship experience.”

For a star who befriended sheiks and performed for 113,000 people in Rotterdam, letting go wasn’t easy. Jordan says the idea to become a pastor at Victory—he’s been a devoted tither since 2008, having moved to Atlanta for its cheap real estate and comforting distance from Hollywood—struck him during a three-week liquids-only fast. He says God promised to blow his mind.

Ironically, retirement boosted Jordan’s bookability. Offers to perform his signature hit—during a Super Bowl preshow, at halftime of a Pistons game—totaled more than $800,000 in 2011 alone. This time, Jordan is the one doing the declining.

“Is it hard to say no?” he ponders in a church studio, the word Believe etched into his leather bracelet. “I think it would be harder to say yes.”