Home News & Opinion Arts & Events Raury, the 18 year old who will be opening for Outkast, performed... 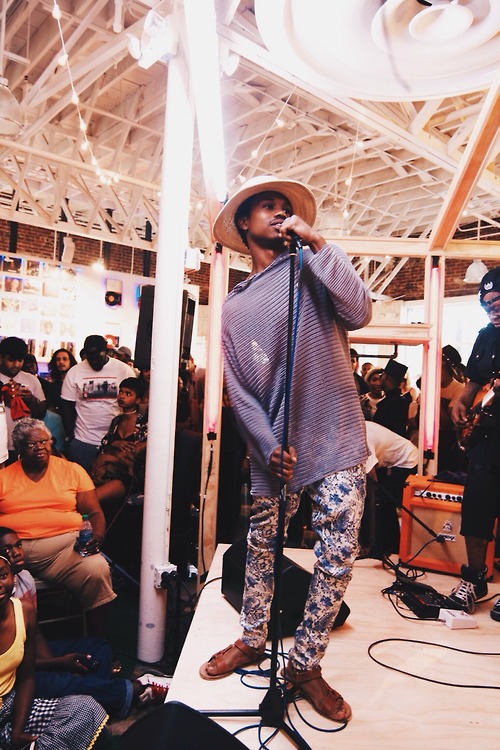 On any given day it can be difficult to find a parking spot near the Urban Outfitters at the corner of North Highland and Ponce de Leon avenues, but a concert inside the store by one of Atlanta’s most talked about up-and-coming artists just about triples the amount of time you will spend circling the lot and asking yourself if Publix would really tow your car if you parked there for a few hours.

The crazier-than-usual parking situation on Friday was courtesy of Raury, the Tucker High grad few people had heard of until he was announced as an opening act for Outkast’s September 27 show in Atlanta. In fact, this was Raury’s second official show ever; his first took place on June 10 at Pop ATL and doubled as a celebration of his 18th birthday.

Inside the store, which was a more spacious venue than you might imagine, Raury and his bandmates performed atop a wooden stage decorated with red and white lights. The set was too short and the transitions could’ve been tighter, but Raury’s charisma and natural stage presence kept things entertaining. The charming kid with the giant sun hat and even larger personality seemed right at home on stage, whether introducing fans to his dog, Goddric, or bantering between songs, many of which were covers (Nirvana’s “Smells Like Teen Spirit” and All-American Rejects’ “It Ends Tonight”).

Commanding the crowd to step outside of their comfort zone and stop being “lame freaking hipster kids” (after all we were in Urban Outfitters, hipster central), Raury was finally able to convince most of the audience to get to their feet and interact with one another by the end of the show. The uplifting vibe of the opening song “Friends” and the chant-heavy “God’s Whisper” carried over into the meet-and-greet portion of the event, where Raury stayed behind taking pictures and talking to fans as others lingered around the store socializing.

The Urban Outfitters gig was the latest of Raury’s “Anti-Tour” shows, which in the past have consisted of Raury showing up unannounced at the concerts of artists like Tyler the Creator and Childish Gambino and performing to often confused crowds until cops came to shut him down. Despite their disruptive nature, the series of stunt performances has been met favorably by audiences and, presumably, some of the artists whose shows he crashed; Raury will be joining fellow Atlantan Childish Gambino (aka Donald Glover) at the September 27 Outkast show in Centennial Park.

Hopefully between now and September, Raury will release more original material and learn to transition better between songs. The East Atlanta native has received praise from artists such as Kid Cudi and Lorde, but like any new performer, he still has to prove himself. At least he seems to have a lot of fun while practicing.