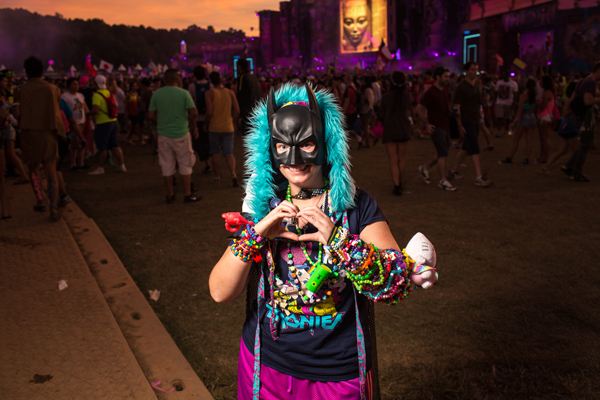 All photographs by Raymond McCrea Jones

Over the weekend, tens of thousands of revelers descended upon Bouckaert Farm in Chattahoochee Hills just south of Atlanta for a massive electronic dance music festival called TomorrowWorld. It was the debut of a U.S. incarnation of the Belgian festival, Tomorrowland, that’s been going on since 2005 and claims to have sold out its June 2013 event in one second.

The 500 acres at Bouckaert Farm, normally the site of more sedate equestrian events, hosted an estimated 50,000 people a day representing 75 countries; there were more international flags flying over Atlanta than I’ve seen since ’96.

And revel these festivalgoers did, in DayGlo dresses, shaggy fur boots, teeny bikinis, raver beads, floral headdresses, masks, tutus, and all manner of wild (skin-baring) costume. They stomped, they spun, they waved their collective arms. Fans buzzed with energy fueled by the steady beats thumping from eight stages—and, apparently, MDMA. Although the organizers took a “zero tolerance” approach to drugs and security did thorough checks, even turning away my friend’s migraine pills, “Molly” was still the most popular girl at the show, with people in shirts reading “Justice for Molly” and “Have you seen Molly?” So far no drug-related incidents have been reported.

With 300 artists—including celebrity DJs like David Guetta, Calvin Harris, Tiesto, and Armin van Buuren—TomorrowWorld had the largest EDM lineup ever.

The venue was nothing short of spectacular, with eighty cargo boxes (that’s eighty tractor-trailers, folks) shipped from Europe to recreate the scene from Tomorrowland, complete with lasers, pyrotechnics, giant mushrooms and lily pads, and the “Book of Wisdom,” a 180-by-90-foot set behind the main stage, which was wider than a football field.

Most attendees camped in Dreamville, a catchy name for a huge swath of grass where visitors pitched tents, but others opted for VIP treatment in clubby outdoor lounges, or poolside with languorous staffers dressed as mermaids.

“Where are you from?” new friends asked. Mexico, Kenya, Argentina, Australia. Words that came up often to describe the experience were “sick,” “Disney,” and “Vegas.” To that list I would add fantasy convention and Olympics-worthy diversity.