Home Eldredge ATL The Bitch is Back 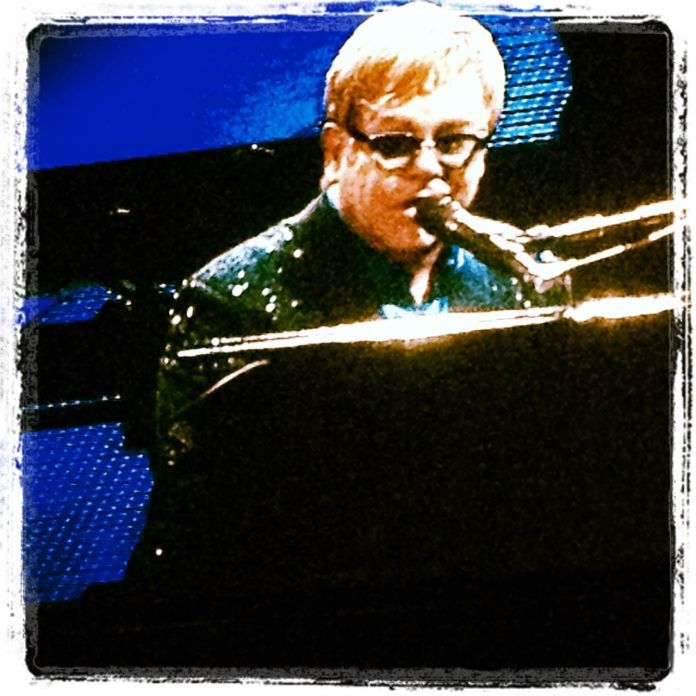 “It’s so nerve wracking to come out and play for you guys,” Elton John conceded to his U.S. hometown Saturday night at Philips Arena as the sold-out crowd stood and cheered. After a four-and-a-half-year break from playing for his local friends and fans, it was clear from the first chord, the Peachtree Road resident was eager to reconnect with Atlanta.

For starters, Elton and the band, including his veteran guitarist Davey Johnstone, veteran drummer Nigel Olsson, Atlanta keyboardist Kim Bullard and percussionist John Mahon blew through the entire first side of the Goodbye Yellow Brick Road LP and then tacked on the title track and Grey Seal for good measure. Wanna feel old? Sir Elton noted that the classic album was released 40 years ago last month. Later in the evening, John and company returned to the source material to perform All the Girls Love Alice, Saturday Night’s Alright for Fighting and, to the delight of old fans in the audience, Elton dusted off Your Sister Can’t Twist (But She Can Rock n Roll), a deep cut from the two LP set’s final side.

The singer also tossed in Holiday Inn from 1972’s Madman Across the Water album (Sir Elton wore a blue sequined jacket emblazoned with the album’s cover across its back). He told the crowd he and lyricist Bernie Taupin were inspired to write the song after two long years of touring the U.S. in the early 1970s. “We stayed in the same room and had the same bathrooms and the same bars every night,” he recalled.

For more than four decades, the pianist and singer has artistically managed to merge his childhood classical training at the Royal Academy of Music with his love of Southern soul music. In the current configuration of his band, Sir Elton fuses the elements brilliantly by adding the Croatian cello duo of Luka Sulic and Stjepan Hauser (who call themselves 2Cellos, and who, I’m fairly certain, were heavy metal rock stars in a previous life) and a dynamic backing vocalist quartet who are almost a concert within themselves: Tata Vega, one of the stars of the new music doc Twenty Feet From Stardom, Rock n Roll Hall of Fame member and Sly and the Family Stone co-founder Rose Stone, her daughter Lisa Stone and former Martha and the Vandellas member Jean Witherspoon.

This line-up sparked fresh life into John’s 1975 hit single Philadelphia Freedom, originally recorded with a string arrangement and Philly International soul aspirations. In 2013, the singer with his deepened instrument, fully realizes the song’s potential. Elton and the musicians also reinvented Guess That’s Why They Call It the Blues (originally a 1983 throwaway piece of ear candy from Sir Elton’s coke-choked MTV heyday) as a soul stirrer, complete with a gospel call and response finish between John and the backing vocalists that sonically transported audience members down the street into the former gospel tabernacle building.

Cellists Sulic and Hauser, meanwhile, impressively shredded with Johnstone (their manes of hair flying and their tattered bows flailing), as Elton pulled out Hey Ahab from his 2010 critically acclaimed album The Union with musical mentor Leon Russell.

My only complaint with the nearly three-hour show? John performed only a pair of songs from his and Taupin’s excellent new recording, The Diving Board — Oceans Away, a poignant salute to World War Two veterans and the single, Home Again. “This song means a lot to me,” John explained. “I’ve been here 23 years now. I love the South and I love you guys.”

Acknowledging his Atlanta friends in the crowd, he dedicated his classic hit Don’t Let the Sun Go Down on Me to rising Atlanta-based power pop trio Kick the Robot members Jesse Scarpone, Daniel Remel and Dylan Hansen. “They’re amazing and I’m hoping to get involved in their career,” praised John. Last summer, Hansen discussed the band’s interactions with Sir Elton in Daily Agenda).

Shortly before 11 o’clock, John was standing on the piano bench and even climbing on the top of the piano as the crowd sang the chorus to Crocodile Rock back to him, before heading home again back down Peachtree.