Home News & Opinion From the Magazine Why does everyone care what Goldie Taylor has to say? 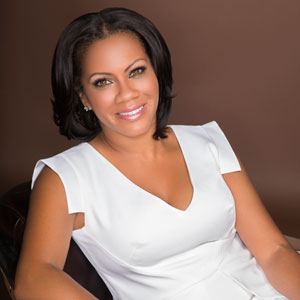 After Goldie Taylor finished taping an episode of Real Time with Bill Maher last fall, she posted on social media that she left the studio with “bloodied knuckles” after going a few rounds with Fox News’s John Fund and Daily Caller contributor Boris Epshteyn.

“I had to take a walk around L.A. after that show, because it was tough,” says Taylor, a onetime Emory University political science student, former Atlanta Journal-Constitution reporter, and ex–U.S. Marine. “I guess I was not prepared for the level of vitriol that ensued from the other panelists.” Real Time executive producer Scott Carter considers Taylor “unflappable” and “able to hold her own,” no matter the temperature of a debate.

Before becoming an MSNBC contributor in fall 2012, Taylor was a regular on CNN, HLN, and MSNBC while also helping NBC develop a new editorial and marketing strategy for thegrio.com. She has 5,000 Facebook friends and more than 38,000 Twitter followers, and she’s not reticent about weighing in on politics, social and cultural issues, gun violence, domestic violence, and gay rights. She got her training as a Marine Corps public affairs broadcaster and, after leaving the AJC, worked on a number of campaigns, including that of Atlanta Mayor Kasim Reed.

Those experiences provide Taylor bona fides as a commentator, but what makes the Atlantic Station resident such a sought-after TV talking head is the conviction with which she shares her opinions and her candor about how her views are shaped by her own experiences. Her father was shot and killed in the seventies. Her brother was killed by a 9 mm handgun subsequently used to commit other crimes. She was raped as a teen and later, as a mother of four, was a victim of domestic abuse until the night she ran naked from her home after being stabbed. The petite forty-five-year-old used to be open about owning a gun and knowing how to use it, but then blogged about turning in her firearm after the Sandy Hook Elementary School massacre.

Because social media allows all to opine, Taylor often goes tweet-to-tweet with critics. “I don’t have patience for disrespect,” she says. “There are certain lines for me—once you get up and over, don’t expect me not to get up and over.”