Home News & Opinion Arts & Events With the addition of a third stage, Music Midtown’s bigger than ever 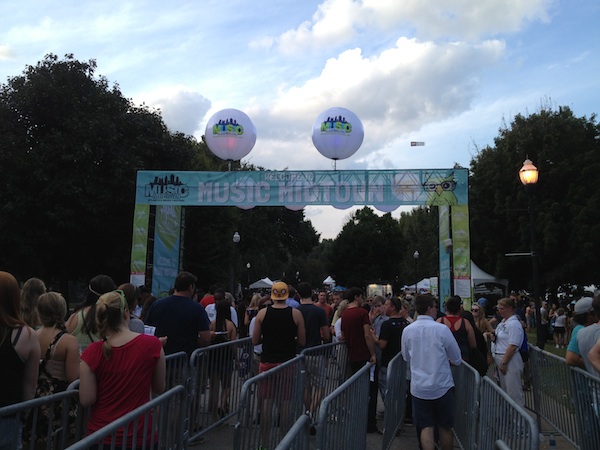 After waiting for dry, sunny days all summer, Atlantans they got the perfect one on the eve of Fall, right in time for Friday kickoff of Music Midtown 2013, the two-day music festival held in Piedmont Park.

Sure, it’s raining again already, but the lineup for the rest of the festival should draw people outdoors.

Founded in 1994, Music Midtown was an annual event until 2005, when it took a six-year hiatus. It bounced back—with and enthusiastic welcome by fans—in 2011, and last year’s festival drew some 50,000 music lovers to see acts such as Pearl Jam, Florence The Machine and the Foo Fighters.

“It’s great to see Atlanta attract so many big names in music,” said Alexandra Wise, who was attending the festival for the first time. “The city is famous for all its summer festivals, and this is a great one to end the season with.”

This year’s Music Midtown includes the addition of a third stage, and a varied lineup of performers emerging and experienced. North Mississippi All Stars, a blues rock group out of the Magnolia State, got things started on Friday, and they were followed by acts including Phoenix, Jane’s Addiction, Journey and Cake, among others.

Saturday festival-goers will have the chance to see groups like Weezer, Yeah Yeah Yeahs and Imagine Dragons, before the Red Hot Chili Peppers close out the festival at 9 p.m. at the Electric Ballroom stage.

Some bands on the lineup are no strangers to Atlanta—The Black Lips, scheduled to perform Saturday at 3:30 p.m., were founded here nearly fifteen years ago.

Meanwhile, iconic rock band Journey was playing the festival for the first time. And even after some forty years of performing, its members say they’re as excited to play events like Music Midtown as they are sold-out arenas and stadiums. “We’ve had a year of eclectic gigs, playing lots of state fairs and staying below the radar,” said Jonathan Cain, who plays keyboards for the band. “Music Midtown has been a fitting way to end our tour this year, and to come on stage and tear it up in front of tens of thousands of people—how much cooler does it get?”

Indeed. And it’s exactly this sentiment that motivates Music Midtown co-founder Peter Conlon to put on the event year after year. “What I love most is watching the fans react to the music and exposing people to different types of music, which this festival does,” he says. “People might be coming for Imagine Dragons, and they’re going to end up seeing Queens of the Stone Age or Kendrick Lamar and get to know those artists, too.”