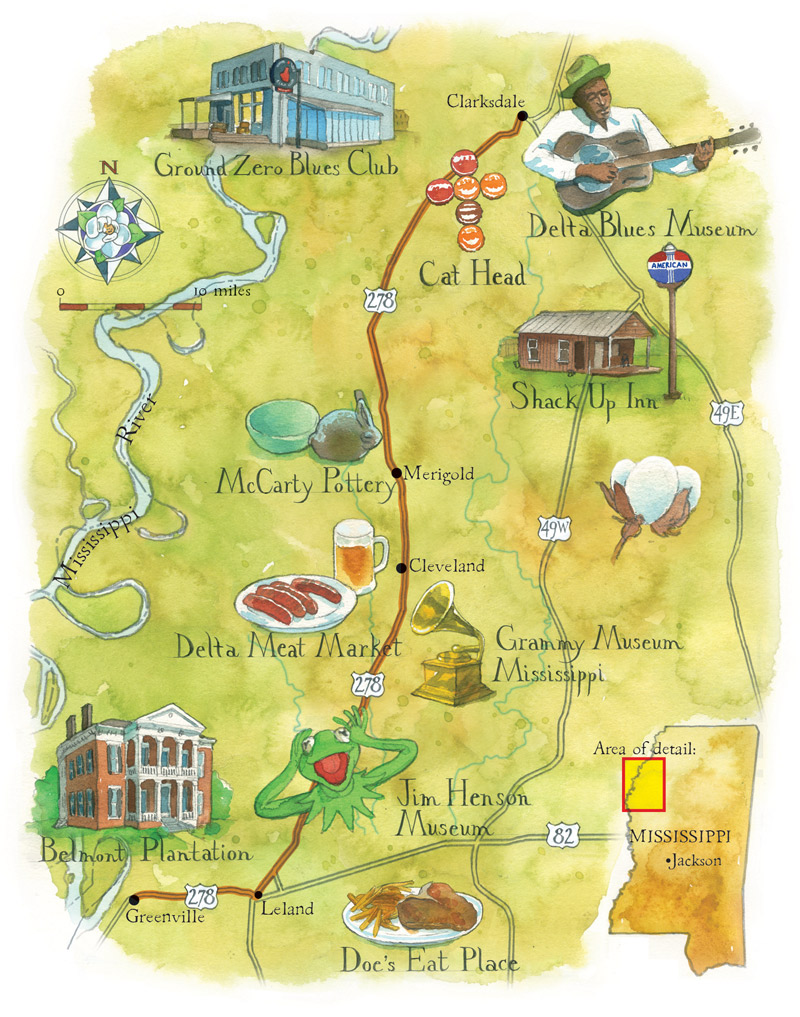 The Mississippi Delta encompasses some of the continent’s most productive land, its soil fed for millennia by the regular flooding of the Mississippi and Yazoo rivers. At the end of the Civil War, the region was largely an uninhabited frontier, which attracted freed slaves and white settlers who cleared the land of timber and established farms. At the turn of the century, two-thirds of the landowners were black, but over the course of the next few decades, most would be stripped of their land—unable to secure credit from banks, disenfranchised by a resurgent white political establishment, and crushed by the precipitous fall of the price of cotton. Reduced to sharecropping, they would give voice to their struggle in music that came to be known as the blues. This lyrical legacy would later be joined by creative endeavors tied to the region’s waters, from pottery marked with a squiggly line representing the river to a puppet inspired by the abundant frogs along its tributaries.

Delta Blues Museum
Situated in Clarksdale’s 1918 train depot, the oldest music museum in Mississippi is an obvious first stop for pilgrims to the land of the Delta blues. Offering a full immersion in the history and sound of this American musical form, the museum showcases costumes, concert posters, and of course, instruments associated with legendary musicians from Robert Johnson to B.B. King. Historical films feature interviews with and performances by blues greats, and powerful black-and-white photography captures life in the Delta. Be sure to check out the remains of the cabin Muddy Waters called home when he was a sharecropper on nearby Stovall Farms. deltabluesmuseum.org

Cat Head
Fifteen years ago, Roger Stolle left a career in advertising and marketing, moved from St. Louis to Clarksdale, and opened a downtown business that is equal parts record store, bookshop, folk art gallery, and visitor information center. Stop in and stock up on blues albums and books about the Delta, including Stolle’s Hidden History of Mississippi Blues. You’ll also find a wide range of reasonably priced pieces by self-taught artists, from Chris Kruse’s vibrant folk-pop portraits of blues legends to McArthur Chism’s bottle-cap crosses and birdhouses. Get the skinny on live music (performed every night in Clarksdale) from Stolle, known around town as Clarksdale’s Blues Ambassador. cathead.biz

Ground Zero Blues Club
Perhaps best described as a juke joint on steroids, this restaurant and club owned by Oscar-winning actor Morgan Freeman and former Clarksdale mayor Bill Luckett presents some of the best blues acts in Mississippi every Wednesday through Saturday night. It also serves up down-home Southern staples, including fried chicken, fried catfish, pulled pork (smoked on the club’s front porch), and Freeman’s favorites: fried green tomatoes and turnip greens, specialties of longtime cook, Ms. Myrtis. After dinner, which is served on communal tables topped with checkered vinyl tablecloths, sidle up to the long bar for a shot of honeysuckle vodka from Cathead, Mississippi’s first legal distillery. groundzerobluesclub.com

Shack Up Inn
Established in 1998, this B&B (that’s bed and beer) stands on the grounds of the former Hopson Plantation, just a few miles south of downtown Clarksdale. Surrounded by cotton and soybean fields, the Shack Up consists of a dozen or so former sharecropper shacks, a handful of grain bins repurposed as cottages, and the old cotton gin, which now houses the cavernous bar. At this kitschy roadside motel of sorts, expect corrugated tin roofs, weathered cypress-plank walls, sparse furnishings, and a yard filled with old appliances, rusting farm machinery, and bottle trees. Dogs are welcome; kids are not. Nightly happy hour features local musicians and a large selection of beers. shackupinn.com

McCarty Pottery
The story of McCarty Pottery is the stuff of Mississippi legend. In 1954, Lee and Pup McCarty set up their first kick wheel and a couple of kilns in an old mule barn in Merigold. They bunked in the barn’s loft and made their first pieces with clay dug from a ravine at their pal William Faulkner’s home. Today, art lovers and avid collectors make pilgrimages to the barn in search of McCarty platters, candlesticks, and casserole dishes, which bear the family’s trademark wavy line representing the Mississippi River (and can retail for five figures). The site is also a draw for gardeners, who come to admire the three-acre Mediterranean gardens recognized in 2012 by the Smithsonian Institution. mccartyspottery.com

Grammy Museum Mississippi
Known as the Birthplace of American Music and home to more Grammy winners (and nominees) per capita than any other state, Mississippi is the site of the first Grammy museum built outside Los Angeles. Visitors to this Cleveland museum can ogle gowns worn by Lady Gaga, Taylor Swift, and Beyonce and watch famous performances by Aretha Franklin, Bruce Springsteen, and Tina Turner. They can also get in on the fun, writing and recording a song in the Songwriter’s Studio or practicing dance moves, from the twist to the moonwalk, on a lighted dance floor. Stop by the Mississippi Music Bar to listen to hits from artists ranging from B.B. King to Faith Hill. grammymuseumms.org

Delta Meat Market
Chef Cole Ellis spent more than a decade honing his culinary skills at restaurants in Charleston and Nashville before returning home to Cleveland to open his full-service butcher shop, specialty grocery store, and hopping lunch spot. The James Beard–nominated chef offers a selection of menu items that change daily. Regulars rave about the super-fresh seafood gumbo and Asian chicken salad and load up on house-smoked bacon and vacuum-sealed packages of hot tamales. The market’s popular Friday happy hour draws townspeople and tourists alike, who get together to toast the week’s end with wine, local brews, and live music. deltameatmarket.com

Jim Henson Museum
This tiny museum on the banks of Deer Creek, the birthplace of Kermit the Frog, celebrates the life and work of Leland’s favorite son, Jim Henson. Opened in 1991 on the heels of Henson’s death, the museum tells the story of Kermit’s origins: The beloved frog was fashioned in 1955 from a coat once worn by Henson’s mother and a halved ping-pong ball. It also recounts how Henson created a population of the beloved puppets for the 1969 Children’s Television Network production, Sesame Street. Displays showcase a wealth of plush toys, figurines, Pez dispensers, lunch boxes, and other items featuring the likes of Kermit, Miss Piggy, Gonzo, and their Muppet friends. birthplaceofthefrog.org

Doe’s Eat Place
Things haven’t changed much since Dominick “Doe” Signa and his wife, Mamie, opened this Greenville restaurant in 1941. Guests still enter through the front kitchen, walking past huge slabs of seasoned beef and tall stacks of plates to the dining room in the rear of the building. There’s still no menu; your waitress tells you what they’re cooking and you tell her what you’d like. Although renowned for its steak, the restaurant’s other classics include broiled shrimp and hot tamales, the first dish the Signas offered hungry diners. Several Doe’s franchises have popped up across the South, but the original location is still owned and operated by the family and was named to the James Beard Foundation’s list of America’s Classics in 2007. doeseatplace.com

Belmont Plantation
Built in 1857, this 9,000-square-foot home was one of the few mansions constructed in the Delta during the antebellum period and is the last one still standing along the river. Over the years, the house has served as a private residence and a hunting lodge; in 2016, following a two-year renovation (which continues in some rooms), it opened its doors as a seven-room bed and breakfast with period antiques. The house is open for tours led by a local historian and expert on the property. Visitors will be wowed by the fourteen-foot ceilings and eleven-foot doors, as well as the intricate moldings and ceiling medallions, regarded as some of the finest decorative plaster work in the state. belmontplantation1857.com