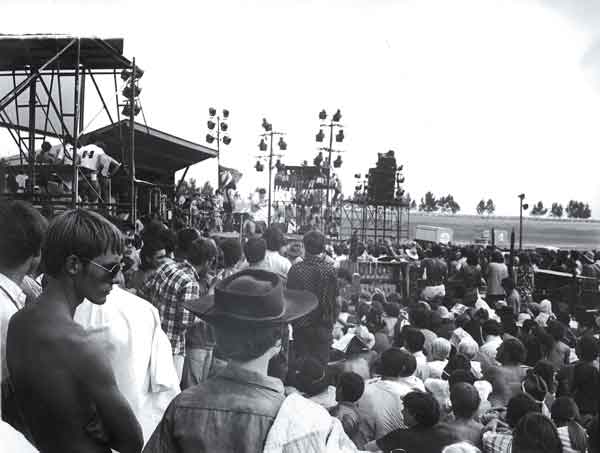 “There it was, man, pop culture in the middle of an unreal dust bowl with a wide asphalt rim.” Thus wrote the Atlanta Constitution’s Albert Scardino forty-two years ago about the first Atlanta International Pop Festival, which took place on the Fourth of July weekend in 1969. Held on a stock car track in the town of Hampton, thirty miles south of Downtown, the festival and its two days of peace and love scooped the much more famous event in Woodstock, New York, by more than a month. Despite the sweltering temperatures (nearly 100 degrees both days), huge crowds (as high as 130,000), and potential for illegal shenanigans and general debauchery, the event featuring such acts as the Staple Singers, Creedence Clearwater Revival, and headliner Janis Joplin went off with very little trouble. As Paul Beeman with the Atlanta Journal put it at the time: “All were having their own scene. Digging themselves.”

The happening has often mistakenly been remembered as being held at Piedmont Park, probably because principal organizer Alex Cooley booked the Grateful Dead and a handful of others at that location on the Monday following the festival in an effort to appease his guilty conscience over actually making a $12,000 profit on the fest. (Can you imagine? A concert promoter making money!) “You have to understand the context,” explained Cooley. “It was the height of the Vietnam War, and Lester Maddox was governor. I wanted to do something that would make people where I lived understand that we could change.”

Cooley’s original intention of turning the Atlanta Pop Festival into an annual event was not to be. Only one more would happen, in 1970, this time in the town of Byron—and boasting more than three times the attendance of the first. The second festival featured Macon’s Allman Brothers and what would be one of the last live appearances of Jimi Hendrix, who died of a drug overdose two months later.

This article originally ran in the July 2011 issue.