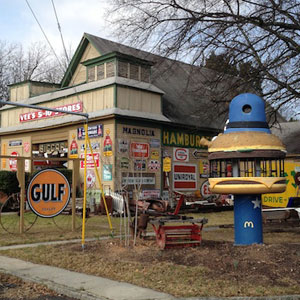 Though we’re still devoted to the monthly Scott Antique Market, rarely are we surprised by what we find there. In contrast, the baker’s dozen antique shops near the intersection of Broad Street and Peachtree Road in historic Chamblee are as fantastical as a wrinkle in time. The Antique Factory, which specializes in retro, space age, art nouveau, and other twentieth-century treasures, often rents props to movie sets. Its sofas played prominent roles in The Hunger Games and Tyler Perry’s For Colored Girls. Rust ’n’ Dust is crammed with glass cases, boxes, and shelves—there’s even stuff hanging from the ceiling—with every collectible imaginable, from vintage cameras and medical paraphernalia (including human skulls) to old appliances. Don’t wear a big shoulder bag or you’ll knock something over. antiquerow.com

Review: Tum Pok Pok is one of Atlanta’s newest Thai restaurants—and its best