Home Eldredge ATL Athens’ historic Georgia Theatre set to re-open in August with all-star line...
Two years ago this month, the Georgia Theatre was nearly destroyed in an early morning blaze. As music fans tearfully gathered outside the still-smoldering 122-year-old structure at 215 North Lumpkin Street, owners Wilmot Green and Scott Orvold vowed to rebuild.
Thanks to ongoing donations from the Athens community, musicians, fans and groups like The Georgia Trust for Historic Preservation and the Terrapin Beer Company (who created a quartet of fundraising brews in the Georgia Theatre’s honor), the structure’s doors will re-open starting August 1 (the photo at right is how the theatre appeared earlier this spring when Intel was in Athens).
On Wednesday, the Georgia Theatre announced a two-week reopening celebration this summer, featuring acts that represent both the venue’s colorful past and bright future. The Glands with Madeline kick things off on August 1, followed by legendary keyboardist Chuck Leavell and Friends on August 2 on a bill with SNAP! (trivia alert: Leavell and his rock fusion outfit Sea Level were the first musicians to hit the stage there in 1978 when the structure was reintroduced as a music venue). Among the other big name acts on the schedule: Bela Fleck and the Flecktones on August 10, Atlanta’s own Big Boi Aug 11, two nights featuring Athens faves Drive By Truckers August 12 and 13 followed by Gillian Welch August 14. More acts will be added in the coming days.
Intel has been promised a tour of the rebuilt structure later this summer but we hear that Orvold and Greene have worked hard to preserve the setup and overall feel of the original theatre but the new facility will enjoy a larger stage, a third viewing level and, thank you Jesus, larger bathrooms. The capacity will now hold more than 1,000 patrons.
In August, concert-goers will be greeted by the theatre’s familiar marquee and brick walls, along with the impressive support beam that managed to survive the flames in June 2009. In addition, the new Georgia Theatre will sport a rooftop restaurant and bar with separate entrance and outdoor seating.
For more info, concert tickets or to make a still much needed donation, visit the Georgia Theatre’s relaunched website at georgiatheatre.com.
Advertisement 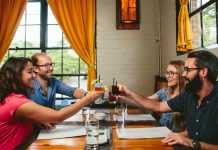 Food and drink discoveries in Athens 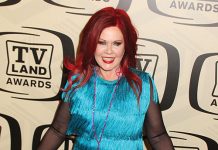 Q&A: B-52s’ Kate Pierson on her new solo album and playing in Atlanta