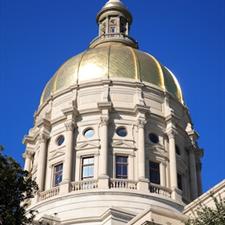 The much-unloved tollbooths on Ga. 400 will likely come down even earlier than promised last year, according to Gena Evans, the head of the State Road and Tollway Authority, who appeared before the Senate Transportation Committee today to give an update on the state of the toll road.

Last July, Gov. Nathan Deal announced that the fifty-cent toll would go away by the end of 2013, a move that was seen at the time as a bid for public support for the then-upcoming regional transportation tax.

Although the tax referendum failed miserably, the toll will still end this year, probably just before Thanksgiving — and, more importantly, in time for Black Friday traffic — Evans told the senators.

Here are some facts and figures about the Ga. 400 toll plaza:

You’ll recall that the Ga. 400 toll was approved in the late ’80s and early ’90s only after some serious politicking, hard-fought litigation and the promise that the toll would end when the highway was paid off — in an estimated 20 years, or about 2011.

The state began backtracking on that promise under Gov. Roy Barnes, who changed the enabling legislation to allow more wiggle room, and continued under Gov. Sonny Perdue, who supported a 2010 wiggle by the Tollway Authority in voting to extend the toll for another decade.

How will the state make up the $21 million it’s gotten used to collecting every year? No one knows, said Evans, who will soon be out of the picture herself. Just last week, Deal announced that Evans will be replaced soon by her second-in-command, Christopher Tomlinson, whom Evans brought over from her brief and stormy tenure as DOT commissioner. Her departure is widely believed to be punishment for the disastrous 2011 launch of the so-called HOT lanes on I-85 through Gwinnett County.

So, can Georgia at least recoup some of its money by selling the toll machines to another state? Not a chance, explained Evans when asked by an enterprising senator: The machines are so obsolete that the state has had to get replacement parts from salvage yards. Here’s another suggestion: government surplus auction — there’ve gotta be gated communities that would love to charge people fifty cents to visit.