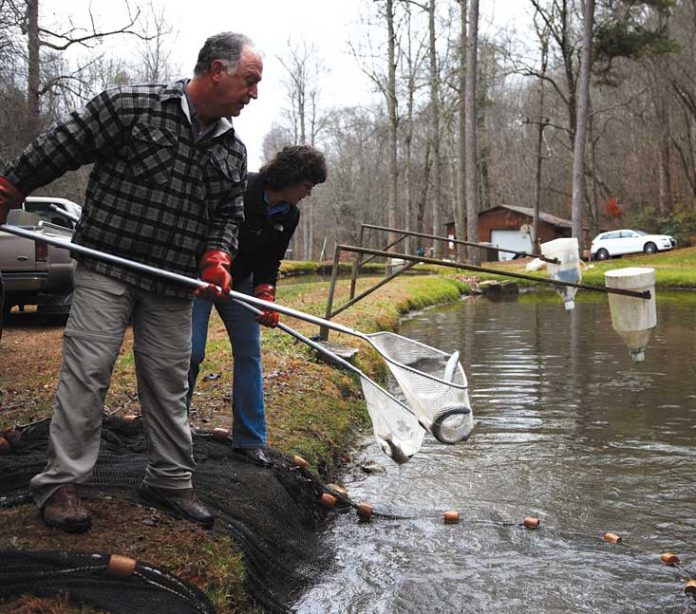 5 a.m.
Terry and Ruth Bramlett begin harvesting trout every morning—including today, a Wednesday—before dawn. Tucked deep in the Blue Ridge Mountains down a gravel road not far from Suches, Georgia, their home sits among a series of interlocking fish ponds they call Bramlett’s Trout Farm. A spring-fed creek courses down from the mountain and flows through one pond to the next, green grass sprouting at the edges, a few leaves floating along the surface. The work moves swiftly; the Bramletts have been hatching, feeding, and culling trout in these ponds for thirty-two years. They corral a school of fish into a corner and work side by side, pulling trout from the water with a pair of nets that could be used to skim a swimming pool. Their ponds yield half a million trout each year. As day breaks over the ridge, the fish jump from the water, scales iridescent in the sunlight.

Like fried chicken and artisanal bourbon, Georgia mountain trout is a fixture on Atlanta’s restaurant menus. Trout are native to the cool, shallow streams and ponds of the Appalachians. Chefs serve the fish roasted whole in wood-burning ovens, artfully plated with caviar, cured with citrus, tossed in ceviches, or simply fried atop a bowl of grits. Inland Seafood, the largest and most established fresh seafood distributor in the Southeast, doesn’t supply Georgia trout because restaurants can buy it directly from operations like the Bramletts’ farm, which provides the freshest fish in the city.

7 a.m.
The trout meet their end in an ice slurry, essentially a freezing bath that slows them into a final stillness. After loading a thousand pounds of trout into the back of their Toyota Land Cruiser, the Bramletts begin the slow and winding drive through the mountains on Highway 60 and then negotiate the congestion of Georgia 400. By midmorning they’re delivering to Midtown and Buckhead destinations like Empire State South, Holeman and Finch Public House, and Fifth Group restaurants Ecco and Lure. Later they’ll stop at Homegrown and Pura Vida. The largest order, nearly 200 pounds, arrives at the prep kitchen under Bacchanalia, the city’s most revered restaurant.

11 a.m.
The weekly shipment to Bacchanalia is greeted by Souleymane Coulibaly, who has been with Anne Quatrano and Cliff Harrison’s restaurant group—which also includes Quinones, Abattoir, and Floataway Cafe—since 1989. Coulibaly has worked in a variety of positions as Quatrano and Harrison’s empire has evolved. He now handles butchering. If you’ve ever had a cut of meat from any of their restaurants, it’s likely that it passed under his knife before landing on your plate.

Coulibaly’s years of experience are visible in the way the blade slides along each trout’s belly without a sign of effort. When the knife occasionally reveals a bright orange cache of trout roe, he carefully spills the eggs into a container to be cured for caviar. As he begins breaking the fish down into fillets, he explains that a fish this fresh is actually more difficult to work with. He holds one up by the head to explain: The body is still board-stiff from rigor mortis. Coulibaly carves out fillets from each fish, slicing up along the collar and down the spine to the tail, his knife undisturbed by the stiff bones. Once the fillets are apart from the fish, he takes a small pair of pliers and pulls pin bones, one by one, from each cut. “Count with me now,” he says, removing each with a flick of his wrist. We count, “One, two, three,” and so on until we lose track around thirty-five.

2 p.m.
Quatrano is delivering the day’s fresh supplies among her restaurants. Some of the trout goes to the seafood counter in the Star Provisions grocery. Other fillets head next door to Abattoir. Along with loaves of bread, collard greens, and African squash, trout arrive at Floataway Cafe, where chef Todd Immel is prepping for the night’s service. Immel, who recently took over the kitchen at Floataway after helming the meat program at Star Provisions for four years, does little to doctor the fillets. Before they hit the pan, he’ll only season with a bit of salt and pepper. “We don’t try to hide anything,” Immel says. “We just stay out of the way of our ingredients’ flavors.”

9 p.m.
Plates of food land at my table, tucked in the corner near the bar at Floataway Cafe. There is a pizza topped with tender slices of butternut squash, house-cured pancetta, and clumps of ricotta cheese. A massive braised lamb shank perches atop a ragu of white beans.

The trout shows up last, one long fillet pan-roasted to golden brown and plated atop a thick smear of creamy grits. A few soft chunks of artichoke are scattered around the dish. The simple path of the day—from pond to car to knife to kitchen to dining room in just a few hours—seems almost visible on the plate. Whether one can see freshness is debatable; whether one can taste it is not.

Photograph by Jennifer Davick. This article originally appeared in our January 2013 issue.