Home Eldredge ATL With 85,192 Facebook enablers, Elf on the Shelf is now on Santa’s... 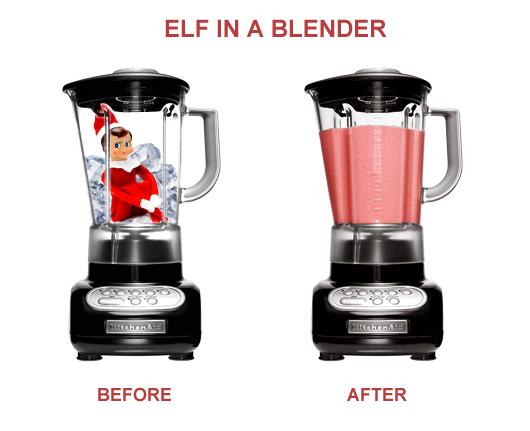 There are two kinds of people in the world at this time of the year— the folks who willingly download Michael Buble holiday albums and the rest of us who have actually heard a Frank Sinatra recording who mock them accordingly. Inevitably then, it was only a matter of time until someone devised a snarktastic Facebook fan page dedicated to the Marietta-based “The Elf on the Shelf” global phenomenon. Yes, Santa’s favorite little snitch on the shelf, who scurries away each night to the North Pole to tattle on your toddler, has now inspired a book, a doll, a TV special, a Macy’s Thanksgiving Day Parade balloon and a Facebook parody page, Elf on the Shelf Gone Bad.

“My wife brought it home back in 2009 and the first thing I thought when I saw the thing was, “That’s Chucky from the ‘Child’s Play’ movies,” explains Salem, Oregon’s Timothy Paque, 43, who immediately began thinking up inappropriate pictures to post for friends and family on his personal Facebook page. On Nov.28, he decided to share his Elf on the Shelf-related antics with the world via a new fan page. As of Friday, the page has generated 85,192 fans and millions of shares and page views. Says Paque: “My wife used to tell me, ‘OK, you’ve gone too far with this’ and now she realizes I’m not the only one who thinks this stuff is funny.”

The page has also inspired other Elf on the Shelf owners, including veteran Atlanta newsman C.B. Hackworth to begin submitting their own deliciously deranged photos of the creepy Claus informant. Fans have snapped Santa’s helper ordering up a French maid Barbie online, reenacting the racier scenes from “Fifty Shades of Grey,” downing booze, smoking cigarettes, in bed naked with a Ken doll and yes, even taking a red magic marker to the bald head of a sleeping baby. Hackworth’s contributions to the page have included a before and after photo of a smoothie for Santa (the special ingredient is Elf on the Shelf, naturally) and a parody of Stephen King‘s “It.”

Paque carefully curates each fan-submitted photo and he says not all of the images get green lit. “There was one in particular that was a little too, well, graphic let’s just say,” he explains laughing. “The object that the elf was enjoying was a little too realistic. I got a big laugh out of it though.”

Fans seem to delight in defacing and disfiguring the doll, one even creating a zombie-inspired Elf on the Shelf homage to the locally shot “Walking Dead.” Says Paque: “That’s one of my favorites because I love the show so much.”

So has Paque heard from Marietta “Elf on the Shelf” creators Carol Aebersolf, Chanda Bell and Christa Pitts in relation to his fan page? “No, I haven’t,” he says. “What we’re doing is clearly parody and, of course, I’m not the first person to think of doing this. It’s just that this page has caught on like wildfire. I’m hoping they find the humor in it.” One interesting statistic Paque has noticed about the demographics “liking” his page? “The audience is a bunch of moms, really,” he says. “After the kids go to bed, the elf comes down off the shelf and they have him doing all these crazy things and taking pictures of it. “

Luckily, Paque’s baby son Ethan is still too small to understand why daddy is posting photos of an elf squatting over a Hershey’s Kiss-adorned cookie. Says Paque: “He’s still a little too young to understand but next year I’m going to have to be super sneaky about this.”