Home Uncategorized The Perks of Being an Extra 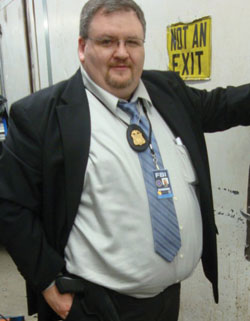 The ad read: “We are seeking a few additional men on a pilot starring Kevin Bacon—men mid 20s to 50s, clean-cut FBI and police types—Must be available to work in Conyers, GA, starting at 6 a.m. and lasting all day both Monday and Tuesday—If you fit this and are available, please email a recent photo and all contact info.”

It was posted on Extras Casting Atlanta’s Facebook page. At age forty, I thought I could pull off the doughnut-loving variety of law enforcement officer, so I snapped some photos and responded. A couple of days later I was playing an FBI agent on the pilot of Fox’s The Following, then simply called Untitled Kevin Williamson Project.

I’m not an actor by trade. My day job is writing. I write novels, comic books, and screenplays. It’s a solitary job, me alone in a room all day. But being an extra has become something of an avocation. I was a dad at the zoo in The Three Stooges, a partygoer in Hall Pass, a New York Hawks fan on Necessary Roughness, a coach on Level Up, plus a diner or a person out for a walk on several projects. The pay (about $64 for eight hours, plus overtime) is akin to minimum wage; however, there are usually some nice catered meals, and the gig offers the side benefit of getting me out of the house for a few days.

On March 19, 2012, I reported for duty at an old grocery store in Conyers. After signing in, I was assigned props (a gun, badge, FBI ID card), wardrobe (a tie), hair, makeup, and the all-important breakfast spread. Then we played the hurry-up-and-wait game, which happens so often in the film industry. I always take a paperback book and my tablet for those long waiting periods. About a hundred of us extras worked on The Following for two days, with a smaller group returning for day three. You can see me on-screen for about three seconds, when I walk behind Kevin Bacon as he briefs other agents on the escaped killer. The big benefit to that role? I’m now just one degree removed from the Footloose star.
bobbynash.com