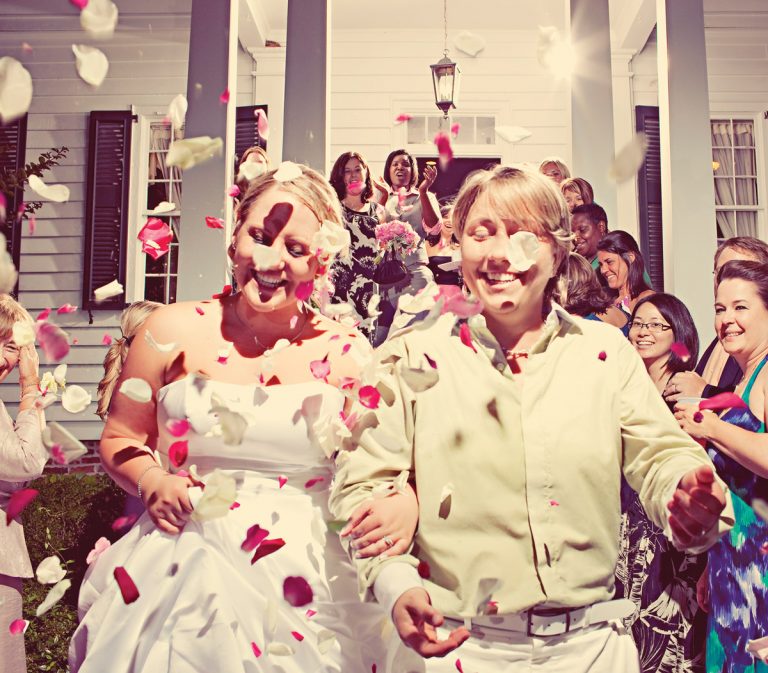 Growing up in Georgia, I dated boys in high school, imagining one day taking their last names and having their babies. It wasn’t until the winter after I graduated that I kissed a girl for the first time and realized a truth I’d been denying myself: I was sexually and romantically attracted to women. It was 1997, and I wasn’t paying a lick of attention to the news. I was ignorant of the freshly inked Defense of Marriage Act, which defined marriage as between one woman and one man—a bill cointroduced by Georgia Congressman Bob Barr and signed into law by President Bill Clinton. I delighted in dating, dinners, and dancing without a single clue that people all around me—nearly 70 percent of Americans at the time—were cheering the homophobic rhetoric, sealing my fate.

In 2003, a week before I graduated from Kennesaw State University, I met the woman of my dreams while line-dancing on a Thursday night—exclusively designated for lesbians—at Hoedowns in Midtown Promenade. Maria had denim blue eyes, a trustworthy aura, and an easygoing nature. We started dating and waited an entire 10 months to rent the U-Haul truck.

Maria and I are a traditional couple, and we wanted to get married before trying to grow our family. We always knew Maria would be the one to propose. She’s more masculine, while I’m more feminine, and it was important to her to fulfill that role. I tried to wait patiently for the big question. I left magazines open to ads of rings I liked. When Maria asked me to marry her, the day before my 30th birthday in Central Park, I was overwhelmed. It was freezing in New York, but all day long, I walked around with just one glove so I could admire my princess-cut diamond ring.

When we returned home to Atlanta, we set out to plan our wedding. I went to our local Barnes & Noble and returned with 15 wedding magazines. As I flipped through the pages for inspiration and information, my heart broke a little on every turn. I was faced with something that I hadn’t yet dealt with in any serious way: We didn’t fit in. Our love was different. And I wasn’t sure if we were wanted at all. Multiple Atlanta wedding vendors didn’t even return my phone calls or emails when I told them I was planning a same-sex wedding.

Luckily, we finally located professionals who celebrated, not just tolerated, our union. On June 13, 2009, Maria and I tied the knot in a garden ceremony at Decatur’s Mary Gay House in front of 72 guests. We were married in the eyes of our community, though society had not caught up to acknowledging love like ours.

After we got married, I took Maria’s last name as my own. Becoming a Palladino proved to be quite the circus act. I had to go to our county’s courthouse and fill out a name-change form (instead of the Social Security office like straight newlyweds). Then, I had to purchase a newspaper advertisement to run for four consecutive weeks with my original name, my desired name, and my home address (in case I was changing my name to commit fraud—a straight newlywed never commits fraud, apparently). I appeared before a judge while Maria sat in a pew in the back of the courtroom. Though I was nervous to the point of tears, I was not going to lie for the sake of achieving my goal. I was well aware that our marriage was not valid in the eyes of the court as I told the judge I wanted to take my wife’s last name. To my relief, he granted my wish.

Officially the Palladinos, we worked toward becoming parents. A child born to a same-sex couple will never have to doubt if they were wanted. Our children were made with love.

From choosing a sperm donor and deciding whether or not he’d be forever anonymous, to finding a reproductive specialist supportive of an LGBTQ+ couple seeking to become parents, to deciding whose uterus and whose eggs to use, there was a lot to navigate. But after three attempts at the doctor’s office, I was pregnant with twins, and the journey to protecting our family began.

First, we had new wills drawn up that specified that if either of us had children, we wanted the other to be their legal guardian. This ensured that if I died during childbirth, Maria would become the legal guardian of our babies. Once they were born, the hospital could not put her name on their birth certificates as a parent. Since the U.S. Supreme Court ruled in favor of marriage equality in 2015, hospitals can now list a same-sex spouse as a parent, though Maria would’ve been listed as the “father.” But, in 2011, Maria had to adopt her own children. The ones she and I had made with love and devotion.

Three months after our twin boys were born, our attorney booked an appointment with a judge she knew to be LGBTQ+ friendly in one of the few Georgia counties that allowed second-parent adoption (a now-obsolete term for adopting a child who already has one legal parent)—not because of progressive laws but because of a loophole that did not specify the parent’s gender. Maria had to undergo FBI and GBI background checks and be fingerprinted. Imagine if all parents were subjected to such invasive scrutiny.

That day in June, Maria became a legal mother to our sons, and we were able to get new birth certificates with both of us as parents. In August, we flew to New York and got legally married at the city’s marriage bureau. Now, finally, we all belonged to each other legally, for taxes (though we wouldn’t be able to file jointly until 2013), for protection, for whatever we needed. We were officially a family, and no one could take that away from us.

Whenever we travel, whether it’s to counties outside of Atlanta or across state or national lines, we carry the paperwork that legally proves we’re a family. Without it, hospitals might not allow us to visit each other. And if something tragic happened and one of us died, we might not be able to bring our loved one’s body home—not without proof that we belong together.

Today, LGBTQ+ Georgians have it easier as they grow their families, but it’s not perfect by any means. While we achieved federal marriage equality, and children born to legally married LGBTQ+ couples are now presumed to belong to both spouses, it’s still critical for LGBTQ+ couples having babies to go through what’s now called stepparent adoption. Being named as a parent on a birth certificate is not necessarily a legal determination of parentage, and the biological parent can still sue for custody. Stepparent adoption ensures that there is a legally recognized parent/child relationship.

While there’s nothing “step” about any LGBTQ+ parents who are present from conception onward, we are still subject to the terminology of the government and the whims of the people who run it. We remain vigilant and cautious, always with the goal of protecting our families and our right to peace, love, and happiness.