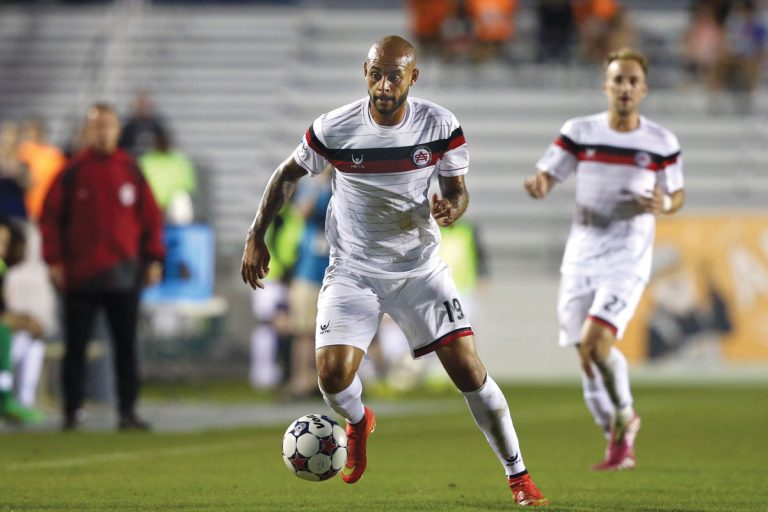 1968
The Chiefs are crowned the first champions of the North American Soccer League after the merger of the NPSL and the United Soccer Association. They also defeat prominent English club Manchester City twice in exhibition games in Atlanta that each draw more than 20,000 fans. Woosnam leaves the Chiefs to become NASL commissioner.

1973
The Chiefs, now renamed the Apollos, cease operations in the NASL after a 3-7-9 season, their worst in Atlanta, as home attendance averages barely above 3,000.

1995
The Atlanta Ruckus is formed by South African businessman Johnny Imerman. After he leaves the team, a new owner operates the NASL franchise for two more years.

1996
Soccer brings record crowds during the Atlanta Olympic Games, with about 90,000 fans on hand at Sanford Stadium in Athens for the men’s and women’s gold medal matches.

1998
The former Ruckus franchise is acquired by two Atlanta business owners who rename the team the Atlanta Silverbacks.

2003
The Beat reach the WUSA finals again, losing to Washington. Shortly before the 2003 Women’s World Cup, the eight-team league folds.

2009
The Georgia Dome becomes a soccer venue, hosting a friendly match between Mexico and Venezuela. The Atlanta World Challenge between Italy’s AC Milan and Club America of Mexico draws more than 50,000 fans. Similar events are staged in Atlanta in 2010 and during the 2013 and 2015 Gold Cup tournaments.

2010
The Atlanta Beat is reborn as a member of the Women’s Professional Soccer League and plays at Kennesaw State University for two seasons, until the league folds in 2012.

2013
The Silverbacks win the NASL’s spring season title but fall to the New York Cosmos in the overall league championships.

2015
In July the Atlanta MLS franchise announces it will be called Atlanta United FC.

In January 23-year-old goalkeeper Alexander Tambakis becomes the first player for Atlanta United FC, which signs him away from Greek Club Panathinaikos.

2017
Atlanta United played its first home game on March 5 against the New York Red Bulls in Bobby Dodd Stadium. The first game at the Mercedes-Benz Stadium is set for July 30. 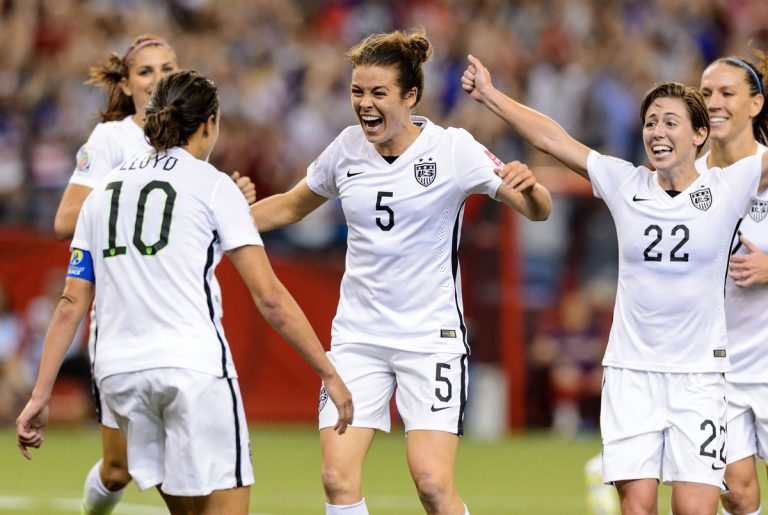 When a reporter in 2003 told Atlanta Beat coach Tom Stone that young girls in the metro area were crying because the team was shutting down, his was a caustic response. “If more of those girls’ parents had brought them to our games,” he said, “they wouldn’t be crying today.”

Attendance is, indeed, a big part of Atlanta’s problem with women’s professional soccer. The Beat, which came to town in 2001 as part of the Women’s United Soccer Association, saw attendance drop by about 40 percent from its first year to its second. In its third year, the league dissolved and took the Beat down with it. The second coming of the Beat, this time with the Women’s Professional Soccer league, drew even fewer fans before dying along with its league in 2012.

“I think it’s important for teams to continue to develop strong fan bases,” says Kelley O’Hara, a 28-year-old Atlanta native, 2012 Olympic gold medalist, and member of the United States National Soccer Team. She played with the second Beat for just a few months before it shuttered. “If you have people invested emotionally in the success of their team, that usually translates to strong attendance.”

Trey Brantley agrees and believes he can help change the sport’s fortunes in Atlanta. The former tech executive was part of a group that proposed plans for a National Women’s Soccer League team in 2014 called the Vibe, which would have played at Grady High School Stadium in Midtown starting in 2016. Last year the group shifted their efforts and dollars to a proposed multiacre, multimillion dollar soccer and sports facility that they want to build somewhere east of the city. The facility would, ideally, be home to a new professional women’s soccer team, as well as a professional men’s team that they say wouldn’t draw fans away from the Atlanta United FC. At press time, Brantley and his associates were negotiating with local development authorities.

“I’m not worried about how a new team would be received,” he says. “Right now we’re feeling pretty good.”

Says O’Hara: “I would love to see Atlanta have a team. It has always been a dream of mine to be able to represent Atlanta [again] at the professional level. I am hopeful that before I retire that might become a reality.”

Soccer is a uniting force at Fugees Academy 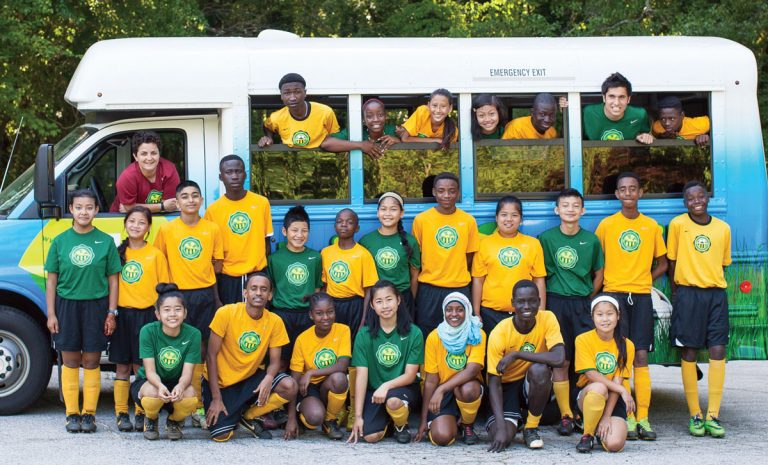 Luma Mufleh is a celebrity in Clarkston. Elsewhere, too, if you run in soccer circles, or if you’ve read the book about her, or seen her profiled as a hero on CNN and CBS Sunday Morning. She started in 2004 as the coach of a group of young immigrant boys. Now the Jordanian native leads a nonprofit with a school called Fugees Academy, housed inside Clarkston Methodist Church. Three students graduated in the spring of 2016, and all of them went to college.

At the academy—with grades six through 12—all of the students play soccer. The boys’ varsity squad competes in the Georgia Independent School Association Conference, where they took second place in 2016. The school fielded its first girls’ varsity team that same year. Soccer, Mufleh says, “defines the shape of our academy. Being involved in sports, playing on a team—that crashes all barriers, including language. In some ways, it is magical. Whether they’re good or not is irrelevant. They’ve become a band of brothers and sisters.”

Now Mufleh and the Fugees Family organization, which raises about $1.2 million a year to fund the 87-student academy, are trying to pull together enough money to build a full educational facility.

It’s a lot, juggling the jobs of CEO, evangelizer, fundraiser, and media-anointed hero. But Mufleh still makes time to coach the kids.

“It’s the highlight of my day,” she says.