“Old enough to drink itself!” “Take this one out to the bocce court.” “A gullet full of rocks, she is.” It’s breezy but accurate descriptors like these that make Empire State South and Five & Ten wine director Steven Grubbs the coolest cat in the cellar. His list is ripe with heavy hitters, but Grubbs will admit that the German Rieslings and French Burgundys are his true jams. 999 Peachtree Street, empirestatesouth.com

Back to Food & Drink
Back to Best of Atlanta 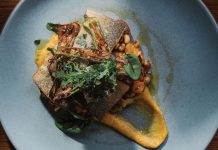