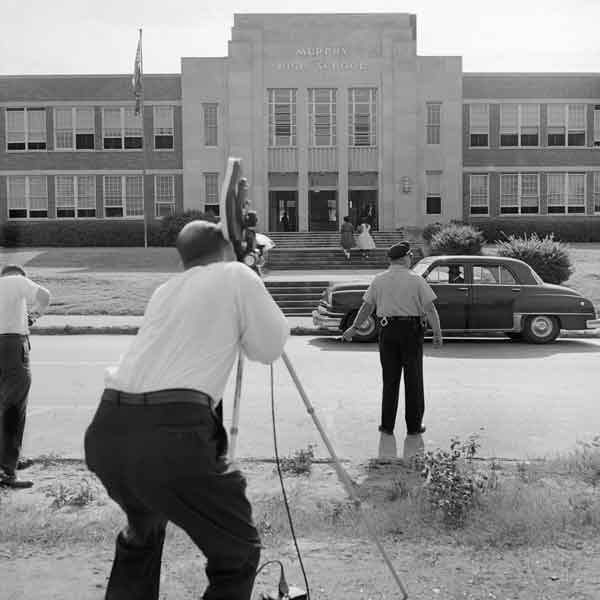 On the morning of August 30, 1961, nine African American students headed for the first day of classes at four all-white Atlanta high schools. They were shadowed by hundreds of reporters, dozens of police officers, and crowds of parents, politicians, and onlookers. At the end of the day, unlike scenes in other Southern cities that resisted desegregation, Atlanta was peaceful. No violence erupted, no white kids showed in blackface, no parents stood on school grounds yelling epithets, and media coverage stuck closely to the script suggested in the information packets that PR-savvy Atlanta organizers distributed in advance. In a press conference, President John Kennedy commended city leaders for organizing integration “with dignity and without incident” and urged other school systems to “look closely at what Atlanta has done.”
Like so much of Atlanta’s carefully burnished image, the good PR was the result of pragmatic behind-the-scenes efforts. Although the 1961 APS integration did not result in the violence of Little Rock or chaos of New Orleans, it arrived a full seven years after the Brown v. Board ruling, and only because of a court order (Georgia segregationists tried to shut down public schools entirely rather than integrate). The peaceful integration was the result of months of planning by OASIS (Organizations Assisting Schools in September), a biracial coalition of four dozen community groups. OASIS volunteers organized “house meetings” in which facilitators fielded questions from parents, using workbooks covering topics that ranged from the obvious (“must Atlanta desegregate?”) to the offensive (“will desegregation result in increased health problems?”) to the racially phobic (“will school desegregation lead to intermarriage?”).
The real heroes of the day were the nine teenagers who entered the hostile territory of those four high schools, and their bravery was largely greeted with silence. Mary McMullen Francis, who integrated Grady High School, told Atlanta magazine four decades later that no one asked her how her day went, and no one talked about her experience. “Even in my own community, it was as if it never happened. The city made it known that nobody wanted you to talk about it.”
This article originally appeared in the August 2011 issue
Photgraph courtesy of the Atlanta History Center
Advertisement