Home Uncategorized How it feels to be falsely accused 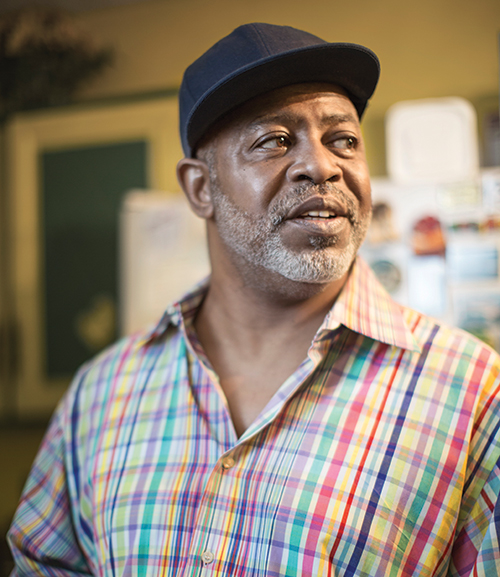 One morning in 1986, as Clarence Harrison played poker at a neighbor’s home in Decatur, a woman was attacked at a nearby bus stop. The assailant dragged her away and raped her several times, stealing her wristwatch in the process. Harrison became a suspect when a confidential informant told police they’d heard someone was selling a watch at his home. The victim singled out Harrison from a photographic lineup and later fingered him in court as the attacker. He was convicted of rape, robbery, and kidnapping and sentenced to life plus twenty years in prison. Harrison wrote to various organizations looking for help, until he was wrongly informed in the early 1990s that all evidence—including vital slides collected from a rape kit—had been destroyed. With help from a woman he’d met by chance during a call from prison, he contacted the fledgling Georgia Innocence Project in 2003, whose interns were able to track down two slides from Harrison’s case. A forensic scientist found that Harrison’s DNA could not possibly match that in the rape kit. In 2004, after serving seventeen years, nine months, and twenty-six days in prison, he was a free man.

Harrison married the woman who’d assisted him, Yvonne, seventeen days after his release, with strangers throughout Atlanta donating everything from the cake to the rings. Though the state awarded Harrison $1 million in restitution, his readjustment hasn’t been easy. A series of bad investments and tax troubles claimed much of the money. After a snowfall in 2010, he was struck by a van, knocked off a bridge, and severely injured. Holed up in the hospital, he lost a Laundromat in which he’d invested thousands, and he now lives on his wife’s income as a school kitchen steward.

The jury found me guilty, and I’m looking at these folks, not really believing. Then I look back and see my mama. She felt the hurt before I did, because I didn’t accept it. She had lost her son.

You’ve got nothing to look forward to, because they took the rest of your life. [In prison] I started out trying to work on my case. That didn’t help; I started getting too many migraine headaches, stressing myself out. Then basically you just give up. They told me the [DNA] evidence had been destroyed; they [denied] parole twice, and told me that life meant life.

In there, I liked to fight. It was fun to me. See, fighting in there was like recreation, something to do, entertainment. You get bored. In order to break the cycle, you might just start a fight. That was for me to keep my sanity.

What’d I miss the most? My kids, spending time with them. They were little girls when I left. When I came out, my daughters were grown. I still don’t have a relationship with them because they hold me responsible for things that happened in their life when I was gone. You don’t get your family back.

The day they told me they lost the evidence and when my mother passed—those would be the worst two days.

When they found the [DNA] evidence, I got scared, thought something was going to happen to it. I said, “Y’all gotta put that somewhere so it don’t get lost—don’t let nobody mess with it.” I told my wife, “I’m fixin’ to come home now!”

When the judge told me I was free, I said, “Free to do what? What you mean by free? I ain’t had time to prepare. Where am I going to live?” That was crazy there. That was hard.

I knew Atlanta very well. When I got out, was like I was somewhere else. When I left, [Interstate] 20 wasn’t but two lanes on each side. Now you got five lanes. It was a trip! They were putting up bigger homes and stuff, but the cars, they had shrunk. I was used to them big Cadillacs. All of the cars looked like little flying saucers.

After four or five years, you realize that you’re no better off than when you were in there. I don’t know whether it’s being institutionalized or what. That’s how you cope with society—reflecting back in there. You’re out here physically, but mentally you’re still in prison.

There’s five of us [GIP exonerees] from Georgia. We kind of hang out. When we have an issue, we’ll call one another and try to resolve it. We depend on each other more than we do anyone else—family members or anyone.

I’ve realized since I’ve been home how much they took from me. Just think, in twenty years I probably would have bought a business, had Social Security benefits, retirement, the whole thing. When they took my youth from me, they took my future away.

That’s the only thing I can still say: Through all the financial problems and everything else, I’m free. So I take it day by day, and just thank God.