Restaurants come and go, often within a few short years. That’s just the nature of doing business in a competitive market shaped by a demanding customer base and rapidly changing trends. Those who manage to live on in the double digits become landmarks but even the most iconic restaurants are not immune to decline. Here are a few old-timers who’ve closed in the last five years, forcing their fans to wave goodbye to piece of local culinary history.

Archna Becker’s popular Indian restaurant closed last year in Decatur after 12 years The Indian restaurant had become an Atlanta mainstay, especially among nearby Emory students, and was noted for its often-modernized Punjabi food. Becker’s vision lives on at the restaurant’s Buckhead location by Lenox Mall.

Hector Santiago made a name for himself first at Pura Vida, a tapas restaurant in Poncey-Highland that served favorites like goat mofongo and malanga root chips. Santiago later went on Top Chef in season 6. In its last year of business, the landlord opted not to renew their lease, citing poor sales. Santiago has since resurfaced in Ponce City Market at El Super Pan, serving Cuban sandwiches and Spanish-Caribbean specialties.

Known for its exceptional wine program and as the former home of then Top Chef star Kevin Gillespie, Woodfire Grill brought an unusual degree of fine dining to clubby Cheshire Bridge. Gillespie, who left in 2012 to open Gunshow, focused on sustainable, farm-to-table cooking on, naturally, a massive hearth grill. The restaurant has since reopened as the upscale, South African-themed Cape Dutch.

Just off Decatur’s Lavista Road, this family-owned Lebanese restaurant served classics like sfiha, fried cauliflower, and grilled halloumi from 2001 to 2015. Despite a warm reception by local critics, business declined and family elected not to renew their lease at the end of last year.

Buckhead Life Restaurant Group opened this long restaurant in 1996 under the charge of Kevin Rathbun, who left in 2004 to open his eponymous restaurant, Rathbun’s. Buckhead Life eventually closed the Southwestern-themed restaurant, citing a need desire to prioritize other projects. The space was turned over to Ford Fry, who opened King + Duke in May 2013.

The 19-year old company abruptly closed all 10 of their restaurants last October, leaving diners perplexed and nearly 1,000 employees without jobs. Leigh Catherall, who took over the company after a bitter divorce between founder Tom Catherall in 2014, had little to say about the closings, though she filed for bankruptcy protection for Smash and the Brookhaven location of Noche shortly afterwards. The group also operated two other Noche locations, Prime, Shucks, Strip, Twist and two Coast locations. The silver lining: Tom Catherall has returned to Atlanta with hopes of reviving his now-shattered Empire. He hopes to open Tom Tom Tapas & Tequila in Virginia Highlands in February.

In 1993, the Buckhead Life Restaurant Group opened this Italian restaurant in Midtown. Led by executive chef Jamie Adams, the kitchen had recently changed the menu to focus on simple, Venetian-style seafood in order to offer a healthier, lighter and more authentic experience. The changes weren’t enough, and Buckhead Life closed the restaurant last May.

Catherine Kraskow came to Atlanta in 1990 and shortly after opened her uncompromising artisanal bakery (a rarity at the time) in the Amsterdam Walk shopping center. Her bakery supplied local restaurants such as Wisteria, Cafe Lily and Watershed.

The Tex-Mex restaurant operated for more than two decades in Morningside Park before relocating to the Pencil Factory Lofts in 2010 Four years in, the owners decided that their tacos al carbon, enchiladas, and flan were not enough to sustain the new location.

Many Atlantans got their first taste of Japanese cuisine when this French-Japanese bakery opened in Sandy Springs in 1985. The restaurant offered a variety of pastries, baked goods and sandwiches. They later expanded, adding a bistro and even opening a second location in Midotwn. In 2013, owner Vic Watanabe hired chef Mihoko Obunai who briefly served ramen at the Sandy Springs location.

The legendary Italian-American restaurant in Morningside-Lenox Park closed their doors to make way for new housing developments. Perry Alvarez, who became a partner in 1977 and the sole owner in the mid-80s, has kept everything largely the same since they first opened in 1971. The old school décor—low ceilings, wood-panneling, carpet, and white tablecloths—and semi-formal service matched the restaurant’s featured classics like veal marsala and lasagna.

For 41 years, Emory students dined at Andy Kurlansky’s pizzeria in the Emory Village. News of the closing attracted scores of customers, desperate for one last meal for nostalgia’s sake. Kurlansky acknowledged that increasing rent prices and the recession hurt his business, he but ultimately closed because was simply too tired after four decades.

The recession brought down this 44-year old institution, which served as a favorite for weddings, parties and prom dinners. The restaurant operated out of an antebellum house originally built in Washington County in 1797, which was later rebuilt and restored in Buckhead in 1967. The kitchen served regional and continental classics like shrimp cocktail, baked brie, and pecan pie.

Old Hickory House once boasted 14 locations across the Atlanta area, but none were more iconic than their Dunwoody Location. Regulars fondly recalled the lively conversations that took place over plates piled high with barbecued pork, fried okra, and squash casserole. The declining popularity of Old Hickory House has left them with only one remaining location in Tucker.

Starting off as nothing more than a walk-up ice cream stand, this Atlanta landmark opened on Ponce de Leon Avenue in 1954. They later expanded to serve diner classics like burgers, hot dogs, and wings and, in 1991, replaced the original structure with a 50s-style chrome and neon clad makeover. With five other locations and their lease coming to an end, the Livaditis family decided to sell the space to Cook-Out.

Evan’s Fine Food first opened in Druid Hills in 1946, and despite a few ownership changes, the diner menu and signature Southern hospitality went largely untouched. As expected,news of the closing was especially on its regulars, many of whom were retirees and were on a first name basis with the staff. 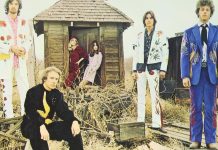 Atlanta Must Reads for the Week: Tyler Perry, tales of a former Grady paramedic, and Gram Parsons’s Nudie suit