Home Restaurants Are these the top ten chefs to know in Atlanta? 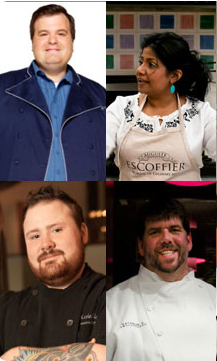 Yesterday, national food gossip blog The Braiser released a list: “The Top 10 Chefs You Need To Know In Atlanta.” Hopefully no one is confusing a blogger phoning it in from New York for a critic that actually has first hand experience with the chefs and city in question, but it is useful, I suppose, for seeing how Atlanta is perceived from the outside. So, here’s the list that the Braiser cooked up:

At first glance, the list looks pretty good. I was pleasantly surprised to see David Sweeney and Asha Gomez make the list, as they seem to be somewhat under-recognized talents in Atlanta. Then I realized that the person writing this list probably just read Bon Appetit last month. A solid half of the list have been a big presence on the Top Chef franchise, or, in the case of Anthony Gray, will be.

There are probably more than a few ways I’d change the list, but the big, glaring obvious ommission is Anne Quatrano, right? I mean, if practically kick-starting the farm-to-table style in Atlanta and then turning that success into an empire of restaurants including probably the best specialty grocer and sandwich counter in Atlanta doesn’t put you in the top ten to know, what does? Oh, right, television.

Screengrab via the Braiser