Home Drinks High on the Vine: The New California Wine 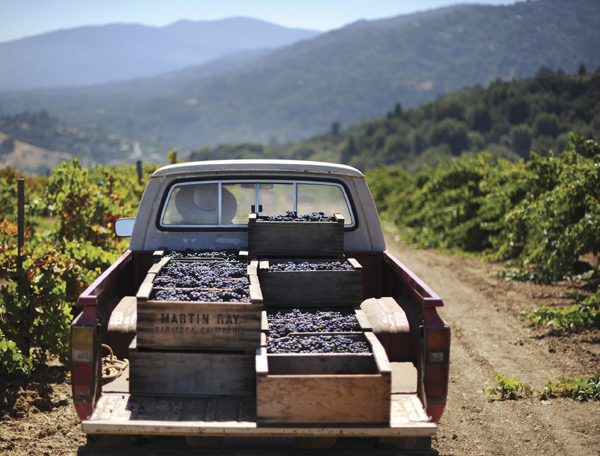 On a chilly night in the middle of November, I was sitting at a table of four in the middle of a wine shop for a Burgundy tasting. We were talking about the wines that move us. Then one man quipped, “If somebody gives me a California Pinot, I always re-gift it. Yuck.”

We all laughed, and the French tasting continued, but that punch line—the notion that some California wine isn’t even worth a free buzz—hit at a deeper point, one that Jon Bonne tackles head on in his first book, The New California Wine. In the opening pages, the San Francisco Chronicle wine editor writes, “I had to confront my own deep skepticism about California’s winemaking reality. Again and again I was disappointed by what I found to be the shortfalls of California wine: a ubiquity of oak, uninspired bottles and a presumption that bigger was indeed better.”

Accustomed to the delicate and nuanced grooves of French wine, Bonne was dismayed by California’s soaring alcohol levels, big fruit, and bold punches. Living in a wine region so convinced of its own greatness, Bonne struggled to find intrigue and character among California’s vineyards. But since 2006 when Bonne began his tenure at the Chronicle, he’s learned otherwise and has documented his discoveries in a book that’s light on its feet and never too serious. He tackles the history and future of California wine with authority and excitement. Just thirty pages in, you’re bound to feel something. In my case, it was an unexpected sense of pride in a region that has endured despite Prohibition in the 1920’s and a plague of insects that forced vineyards to replant in 1989.

Next week Bonne lands in Atlanta for two wine dinners—one on Tuesday, March 4, at Five & Ten and another at Empire State South on Wednesday, March 5. Look forward to wines from Peay Vineyards, Copain Wine Cellars, Marietta Cellars, and Lioco at both.

I recently spoke with Bonne over the phone about the book and the growing wine culture across the United States.

Is it fair to say that you stress this tension between winemaking as a science and a business for California and winemaking as a culture and a tradition for the French. One group wants to maximize profits and the other wants to channel terroir?

All of them are trying to maximize profits. The difference is that the tradition of winemaking in France and in Europe is as an agricultural product. Whereas in California, the effect of Prohibition entirely removed winemaking from a distinctly agricultural realm based on the way the industry re-launched, which was almost entirely through large companies.

There also was this enormous schism between the companies who made the wine and the farmers who grew the grapes. That schism is still very much a guiding principle of California today. If you look at the way the modern winemaker operates, until recently, they were trained specifically in cellar science and maybe in a little bit of viticulture. You’re either studying grape growing or wine making. One of the things that became important to me in this book is in this complicated and expensive world, there is a new generation of California winemakers trying to bridge that gap back together.

Every region in France—great or small—had its own wine culture. America never had that. What California wanted to do was make very cheap table wine or very expensive wine. Now, there’s an understanding and an appreciation that there can be local wine that doesn’t need to be great. It doesn’t need to be fancy and impressive. It can just be interesting and delicious and expressive of its origins.

The other piece of that is the great transformation that happened in American wine culture with the embrace of wine by baby boomers. Just as an economic force and coming out of Prohibition, this was the first generation that regularly opted into putting wine on the table with dinner. What’s compelling is that their kids are becoming old enough to buy wine on a regular basis. To have a significant generation of wine drinkers getting more interested in wine and coming to it with a much more mature perspective is this quantum leap in wine culture in this country. You see it already in the way that restaurant wine lists are composed. You see a lot more willingness to explore, even in the selection by the glasses. It used to be just Cabernet, Chardonnay, and Merlot.

If you had to pick one wine that best captures the point of your book, what would it be?

I resist ever picking one wine because it’s so contextual, but if I were going to pick one just in the sense of wrapping together the old and the new, it would be the Matthiasson White. It’s made by Steve Matthiasson, who was my winemaker of the year this year. The importance of Steve is not only the wine he makes, but also the fact that he’s one of the best viticulture consultants in Napa. He represent a great understanding of the continuity from past to future in California.

Moment of truth: you’ve got an unlimited amount of money but you can only stock wine from one place. Which is it, California or France?

The diversity here will never rival what France has, but right now, I would give it to California because of how exciting the wine is and because the French have fallen into a dark place. That is not to say that there aren’t extraordinary wines in France, but so many of the young winemakers there have to work outside the system. In a way, what I was exploring in California, I’m hoping that five years from now there’s a similar cohesiveness to change in France because there is a huge generational clash on the horizon. But there’s such extraordinary excitement with what California can do. The diversity of what’s here and the willingness to go back and see how much potential is out in the field is unprecedented.