And I’m finding there are ever more modest Indian restaurants spread across the whole of the metro area that cook the specific, traditional foods that Indian expats recognize, not some ubiquitous, creamy glop the owners think Middle America wants. I’ll write about a fairly disappointing meal at an Indian restaurant with lots of potential tomorrow, but today I’ll invite you inside some home cooking lessons I’m getting from a friend from Kerala, the southwestern-most state in India, formerly known as the Malabar Coast. I visited Kerala last year and I am most MOST obsessed with its unique foodways.

Kerala’s prominence on the spice route brought religious and social influences that eventually integrated themselves into the culture. (Pics of the feast after the jump.) Kerala-style beef curry is the prime example: It is eaten by the state’s Syrian Christian community (which today most closely aligns itself to Catholicism). Yes, if you’ve never heard of it before, these Indians eat cows, the same ones their Hindu neighbors regard as sacred. Religious considerations aside, beef curry is amazing, often akin to Indonesian beef rendang in its texture. The beef is first sauteed in coconut oil depth-charged with black mustard seeds, curry leaves, cinnamon, chile and other aromatics, and then simmered in coconut milk until the meat is tender. Then the heat goes up and the milk is boiled down until the sauce almost evaporates. Oh it makes me happy.

This is from a meal made this past Monday night, using beef from Georgia’s White Oak Pastures/Harris Family Farms purchased at Whole Foods. My Keralite friends marveled at how the grass-fed beef tasted like the meat they remember from Kerala. Simmer, simmer … This is a dish called thoran, a vegetable stir-fry seasoned with the luminaries of Kerala cooking—curry leaves,  black mustard seeds and lots of coconut. You can make thoran with all kinds of vegetables (and even seafood like squid). We made it with beauteous purple cabbage (getting a sprinkle of tumeric in the pic below). One of the glories of Kerala food is a rice indigenous to India’s southwestern area called chamba. It is stubby, with a rose hue and a deep red, squiggly germ that remains on each grain. Indian rice shortages have made it hard to find chamba in the U.S. (a visiting relative recently replenished my friends’ chama supply). The finished beef curry, with its dry-ish appearance. I’ve wholeheartedly adopted the way Keralans eat: with their right hand, no utensils except for serving. My teaching friend also whipped us up a “buttermilk curry,” which is essentially seasoned yogurt—a traditional accompaniment. There’s my pale white hand, going in for the kill. If only the whole of Atlanta could sample this cuisine in a restaurant. 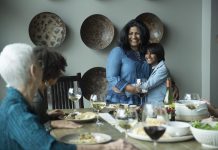 Asha Gomez is closing Spice to Table to focus on tea