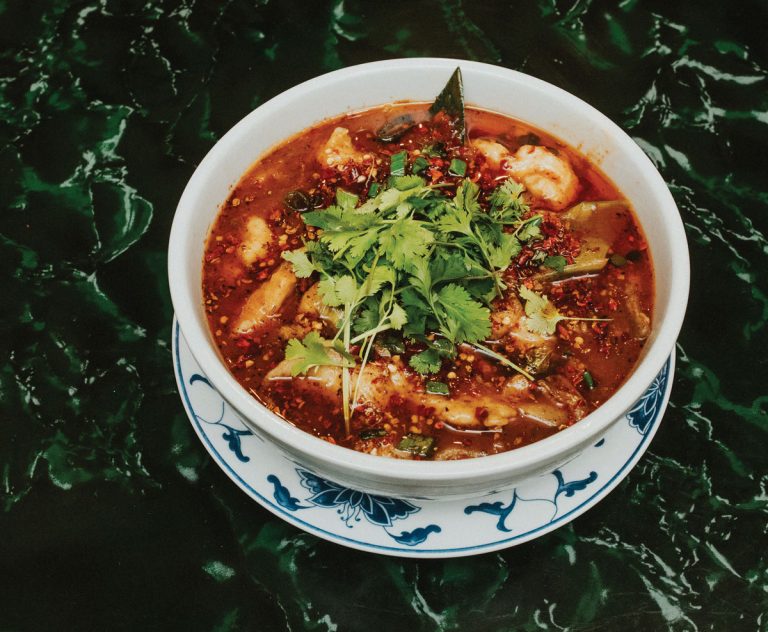 Tasty China was the first restaurant in town to serve undiluted Sichuan cuisine. Back then, in 2006, the kitchen was helmed by the talented and elusive Peter Chang, who ignited a love of ma la (hot and numbing spice) that paved the way for Masterpiece and Gu’s. Without Chang, who’s drawn a cult following to restaurants across the South, the original Marietta location faltered at times and flourished at others. (There are also locations in Smyrna and Sandy Springs, and a Ponce City Market offshoot, Jia.) But Tasty China currently is in superb—if not quite Changian—form, churning out stellar dishes including confit-like fish filets in chili oil and velvety, mild chicken with three types of mushrooms. 585 Franklin Gateway, tastychina.net 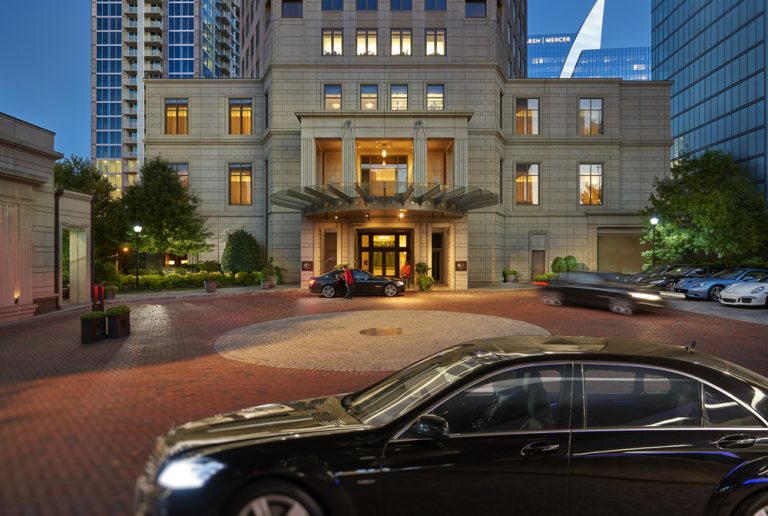 As a city dweller, my idea of an escape usually involves a destination far from mass civilization: Take me to a secluded beach or give me a winding mountain trail. So as I gaze down from my room on the fourteenth floor of the Mandarin Oriental, Atlanta and watch the endless traffic on Buckhead’s Peachtree Road, I’m surprised by the sense of calm I feel floating above it all. During my stay here, I’ve come to understand that the hotel is adept at graciously transporting guests out of the urban hustle.

For me, the calming effect began at the entrance, a circular courtyard removed just enough from the street to engender a delicious sense of seclusion. Beyond the building’s limestone and cast-stone facade, the foyer gleamed with black-and-white marble flooring. I couldn’t resist climbing a staircase just off to the right, which led to Taipan, a lounge that serves a spot-on shandy made with Blue Moon’s Belgian white and ginger syrup.

Drink in hand, I looked out Taipan’s windows and spied a cloistered English garden, soothing in the symmetry of its topiary, which stays verdant even in the cooler months. Floral themes, I later learned, show up everywhere on the property. Vases of red or pale pink orchids draw the eye. Asiatic prints of blossoms adorn the guest room walls. Even the striations running through the cocoa-colored marble in the spacious bathrooms suggest wintry branches plucked from an Andrew Wyeth painting.

Indeed, the property has come into bloom since the Hong Kong–based Mandarin Oriental group took over management in spring 2012 (it was originally the Mansion on Peachtree). And the timing was auspicious. Mandarin Oriental arrived in the Atlanta market as the local economy was reenergizing, and the global brand brought further cachet to Buckhead’s lineup of luxury hotels.

Nowhere does the group’s reputation for exceptional service express itself more elegantly than the spa. It’s everything a serene getaway should be. Locker rooms sprawl, and amenities include sauna, spa, and a whirlpool practically big enough for swimming laps. The staff turned my couple of hours there into a study in serenity, beginning with a cup of fragrant tea in the waiting area. The classic Oriental Essence massage was just what I needed: My therapist offered several varieties of scented oil (with the heady scent of mandarin a recurring leitmotif, naturally) and gave extra attention to my knotty shoulders. So successful were their soothing ministrations—and so seductive the hotel’s enchanting atmosphere—I’m finding it difficult to leave my room and descend to the hotel’s ground floor to depart. At least my jellied mind and muscles feel restored enough to face the bustling world outside again.

Del Frisco’s Grille sits just across the courtyard from the hotel. Start with cheesesteak spring rolls before indulging in a New York strip or filet mignon. The hotel’s intimate Cafe & Bar offers a breadth of New American cuisine, from crab cakes and truffled chicken salad for lunch to autumnal dishes like Georgia-raised lamb with cassoulet and rosemary jus for dinner. delfriscosgrille.com/atlanta

At the Atlanta History Center, about a five-minute drive from the hotel, experience one of the nation’s most extensive Civil War exhibitions and check out America’s only complete collection of Olympic torches and medals in the Centennial Olympic Games Museum. Coming in January: Atlanta in 50 Objects, a crowd-sourced exhibit of items that communicate the city’s essence. atlantahistorycenter.com

The Shed at Glenwood

Todd Richards, most recently executive chef at the cafe in the Ritz-Carlton, Buckhead, took over the reins of the Shed after Lance Gummere left to join Shaun Doty at upscale chicken shack Bantam + Biddy. Richards draws on homey flavors to craft polished plates: Smoked pork chop with sweet potatoes, Brussels sprouts, and a not-too-sweet huckleberry sauce is one standout. Contrast the menu’s many Southern flavors with an Indian-inspired starter of lamb meatballs with yogurt, date chutney, and mint. Don’t worry, customer favorites like the slider specials and the homemade “Ding Dong” haven’t disappeared.

Is that Sir Anthony Hopkins at the other end of the long banquette? No surprise. Buckhead’s newest sushi palace flaunts a stunning room of contrasting woods and a corps of cooks manning the eleven-seat, white-oak sushi bar bathed in buttery light along the back wall. On weeknights the mood is sedate, and the meal’s focus rests squarely on the contemporary Japanese cuisine of Fuyuhiko Ito, former executive chef of bygone MF Buckhead.

Beyond traditional sushi nigiri and rolls, Ito’s menu takes cues from the playbook of Nobuyuki Matsuhisa’s global chain of Nobu restaurants: shrimp tempura with ponzu or a spicy mayo-based sauce, grilled cod marinated in miso, yellowtail sashimi crowned with rings of sliced jalapeño. The precise food alone makes Umi a worthy addition to the city’s dining scene, but the place has a split personality: It quickly became a celebrity magnet, due in large part to its proximity to the St. Regis Atlanta, where visiting actors and athletes often stay.

You’ll barely recognize the space that previously housed Nava for nearly two decades. Adios, Southwestern kitsch; hello, boutique-hotel slickness with smoky wood floors, a sinewy bar flanked with folding chair-stool hybrids, and an open kitchen featuring a custom-designed, fire-breathing hearth around which much of the menu is designed. Ford Fry’s fourth restaurant, his first in Buckhead, isn’t as themed as his other ventures: JCT Kitchen and Bar (Southern), the Optimist (seafood), and Decatur’s No. 246 (Italian). The menu could be labeled “of-the-moment New American,” with dishes like candied lamb belly with sheep’s milk feta and marinated cucumbers; crab revved with Thai basil, mint, and chile on toast; and a comforting whole roast chicken for two with bread salad. An early visit found the kitchen capably handling the swarms of curious diners, though, at $16, the thick burger (a combination of chuck and dry-aged steak cuts, topped with coal-roasted onions) needs to be juicier and served on a sturdier bun.

What began as an imaginative deli blossomed into a full-service restaurant. Small plates on the monthly changing dinner menu can range from pimento cheese to beef tartare, and entrees lean toward comfort. The kitchen gets especially creative at brunch, and the sandwiches that established the restaurant’s reputation are still among the best in the metro area.

How refreshing to scan the menu at this newcomer and not find pimento cheese or deviled eggs, two dishes so ubiquitous to the metro area’s “Southern farm-to-table” explosion that they’re both shaping up to be the fried calamari of this decade. Executive chef Ted Lahey, who worked for Hugh Acheson at Athens’s Five and Ten, thinks for himself with dishes like Hogs ’N’ Quilts, moist pulled pork folded into chive crepes with an admirably subtle vinegar sauce. The man is not afraid of calories. His Charleston she-crab soup is so rich that it’s hard to finish, and he gilds his country-fried veal with sausage gravy. Our biggest complaint: He needs to cut his unwieldy version of fried chicken into smaller pieces. Who wants to wrest wings, legs, and breasts apart while the batter crumbles off? Kudos to the lengthy bourbon list, though.

This pristine little spot, hidden in the back of a small commercial center off Buford Highway just outside the Perimeter, serves some of the freshest-tasting Korean food in the metro area. Blackened windows conceal the restaurant’s calm, neutral-toned interior draped with bamboo blinds.

You can skip over the esoteric-sounding ingredients (web-footed squid, horsetail fish, acorn jelly noodles) for more accessible dishes like chilled noodles with fresh vegetables, rich pork-on-the-bone soup, and savory mung bean pancakes. For a sustaining lunch, try the boribap—a combination of steamed rice and barley into which you mix a platter of vegetables and spoonfuls of soybean soup and bubbling tofu stew.

Among the banchan (a starter spread of small dishes) is an exceptionally fine version of spicy, unfermented kimchi. Excellent varieties of soju, a vodkalike spirit native to Korea made from rice or other grains, are served in metal teapots. As you leave, check out the two small cabanas beside the restaurant, used for outdoor dining in good weather.

Among Hugh Acheson’s expanding stable of restaurants—including the Florence, an Italian Southern concept scheduled to have opened in Savannah by the end of May—his first-born is well worth the drive to Athens. Nearly a year ago he relocated Five & Ten to a restored Colonial Revival–style house that oozes Southern gentility. Executive chef Jason Zygmont collaborates with Acheson and remains faithful to his aesthetic: Touches like roast chicken consommé and butter-suffused potato puree, paired with a farm egg, allude to Acheson’s French culinary background. Come summer, save room for pastry chef Mike Sutton’s swoon-worthy fruit pies.