Home Uncategorized Meet the mobile paella chef who puts on a show in Atlanta...

In the photos he posts to Instagram—and he, like many independent food vendors these days, is a prolific ’grammer—Arturo Yzaguirre favors a certain pose. He’s outdoors, standing behind a pan of paella the size of a washtub. Bubbling and steaming, the food before him—mussel shells popped open, little pink arches of shrimp, strips of red bell pepper and handfuls of peas—is intricately arranged and riotously colorful, while the chef, grinning, spreads his arms wide to present his handiwork. For Yzaguirre, the spectacle is nearly as important as the sustenance. “I have great respect for the art of cooking live paellas,” he says.

The audience, therefore, is a crucial part of the equation. Yzaguirre is a mobile paella caterer who typically cooks for groups of 25 or more, outside on patios or in backyards, at parties where there are often other diversions—at clients’ request, he’ll arrange live guitar music, waiters and bartenders, even flamenco dancers. His clientele is primarily Latinx; based in Marietta, he travels all over the metro doing weddings, birthdays, office parties, and so on. He’s booked most weekends.

Originating in Valencia, paella is one of Spain’s best-known dishes, a hearty combination of meat, seafood, and/or vegetables on a base of saffron-tinted rice. It’s food meant to serve a crowd, and indeed meant to be prepared outdoors—as Yzaguirre notes on his website, paella in Valencia is “cooked by men over an open fire, fueled by orange and pine branches along with pine cones.” While preferring the old-school method, he relies on the gas flame provided by a big portable stove. Yzaguirre himself is a native of Acarigua, Venezuela, where he learned to cook from his father and from a neighbor, a chef from whom Yzaguirre learned the basics of paella. He launched his first restaurant at age 22.

When he landed in the United States in 2000, Yzaguirre further honed his skills at paella parties in Miami, another city with a large Latinx population, where such gatherings are common—and where plenty of caterers provide the service. Yzaguirre, whose wife collaborates with him on the design of his dishes, thinks of himself as both a student and a pioneer of paella: “The paellas are a reflection of my great research on how paella should be represented in these shapes, colors, and design,” he says.

The paellas he prepares can stretch to several feet in diameter, depending on the crowd, and resemble edible, brightly colored mandalas. Various options are available—classic Valencian, with chicken and pork, scented with rosemary; paella marinera, with seafood and a shot of cognac; an all-veg paella. But the thing to get is Arturo’s special, which includes chicken, pork, fish, shrimp, clams, scallops, squid, and mussels. And paella is not the only item on the menu: Yzaguirre is equally adept with tortilla Española (the famous tapa of eggs, potatoes, and lots of olive oil), ceviche, and flan.

When the pandemic hit, Yzaguirre worried his style would be cramped; people weren’t partying like they used to. But he was better-positioned than others to take the hit. He’s already outdoors. Yzaguirre was able to keep going with a few sensible adjustments: distance, protective equipment. Where typically he likes to serve food directly to guests, nowadays, he lets them serve themselves.

And while fun, the big crowd is not a requirement: Yzaguirre cooks for smaller gatherings, too. Someday, he hopes to prepare food of all kinds, for parties of all sizes—he’s in the early stages of planning an Iberian restaurant called Arturo Paella Tapas and Wine. 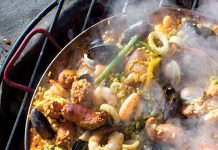 Tips and recipes for a perfect paella party