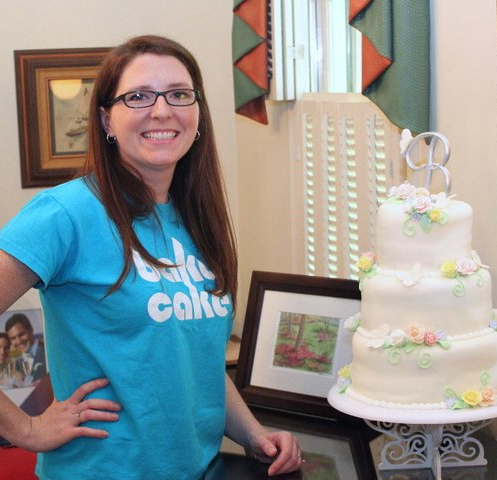 If you notice a number of home bakers coming out the woodwork in your community, you can thank Sara Rylander. The Acworth baker (right) got the ball rolling on Georgia’s new Cottage Food Program, which allow entrepreneurs to prepare certain types of foods in their home kitchens to sell directly to the public.

Before the new regulations were released by the state Department of Agriculture in September, Georgians were prohibited, under most circumstances, from selling any type of food that was not prepared in a commercial-grade kitchen used solely for commercial purposes. Technically speaking, if you wanted to sell birthday cakes out of your home, you had to build a second kitchen used only for that purpose and meet the same inspection standards required of restaurants or other commercial kitchens. That bar was too high, and financially impractical, for most folks to meet. The result: a lot of home cooks selling baked goods under the table, without licensing or food safety training.

Rylander thought there must be another way. After researching the costs of adding a second kitchen to her home or opening a storefront bakery, she discovered that other states had created “cottage food” rules to accommodate people just like her—entrepreneurs who wanted a way to safely and legally sell homemade foods to the public. In July 2011 she started a Facebook page, and the next month she launched a petition to create a similar rule in Georgia. She wrote her state representative, Ed Setzler (R-Acworth), who suggested setting up a meeting with Agriculture Commissioner Gary Black.

As it happened, the ag department was already on board. Georgia DOA’s Food Safety Division director, Oscar Garrison, was serving as president of the Association of Food and Drug Officials and was aware of other state’s cottage food rules. Craig Nielsen, his division’s regulatory affairs manager, was working on developing guidelines that states could use to establish their own policies.

“Timing is everything,” Garrison says. “Commissioner Black wanted to give people an opportunity to get into business, but then again, we had to have some food safety requirements in place.” So when Setzler asked for a meeting and Rylander presented a petition with nearly a thousand signatures, the effort picked up steam. Within a year, the department issued its Cottage Food Rules, enabling the state’s home-based bakers to come out of the shadows.

Now, entrepreneurs may seek licensing of their home kitchens to prepare a limited range of foods for direct sale to consumers. The list includes breads, cakes, cookies, fruit pies, jams and jellies, dried fruits, herbs and mixtures, cereals and granola, nuts, vinegars, popcorn and candies. Operators will not be able to sell anything that requires refrigeration, and they will not be able to supply to restaurants or retailers. (Prior to these rules the state already made an exception for the sale of low-risk foods at nonprofit events like school bake sales and at farmers markets operated by nonprofits or local governments.)

Approval requires completion of a food safety class, a local business license and a home kitchen inspection. Rylander says several individuals around the state have already met the requirements and received their permit.

“It’s going to be a good thing for Georgia, and based on the feedback I’ve gotten across the state, it’s opening doors of opportunity to people who otherwise wouldn’t have been able to walk through it,” she says.

Garrison says it’s been exciting to see the number of inquiries coming in from around the state, but he cautions applicants to first checking with their local government to make sure home-based businesses are allowed. Rylander says she’s seen permits issued in most metro Atlanta jurisdictions. “We’ve got a couple of holdouts, but I think it will all smooth itself out in the next six months or so,” she says.

For aspiring entrepreneurs like Talitha Seibel, the cottage food rules are a godsend. Although some small food businesses have been able to get operate legally by renting time in “shared” commercial kitchens, such an arrangement wouldn’t work for Seibel’s company, Gluten Free Rebel, because she plans to use allergen-free ingredients. “With the new regulations, I can do baked goods,” she says. “It rules out some things I was hoping to do, like a gluten-free food pickup service, but it would be a good start.”

Rylander and Garrison both say the rules work because they combine practical food safety precautions with certain low-risk foods and preparation techniques. The cottage food laws won’t allow a home cook to prepare every kind of food allowed in a commercial business, but it will enable them to test the waters for a larger enterprise while keeping consumers safe. As with other local food efforts, the personal relationships forged between producers and customers matter.

“You’re talking about cottage food operators operating within their own communities, and it’s up to them to not make anyone sick,” Rylander says. “They hold themselves to a high standard because it’s their name on the label.”