Almost everything I know about Nigerian food is seated in memory. As a kid, I watched my father cook dishes from his homeland in our Central California kitchen. My dad has a PhD from Berkeley, but I don’t think he’s ever grasped just how his American-born children turned out to be so American—what with our insatiable cravings for tacos, burgers, and Chinese takeout. Even though he married a woman from Los Angeles and raised a family throughout the Golden State, our favorite foods were a mystery to him. In his opinion, nothing could take the esteemed place of “food from home.”

My understanding of Nigeria mostly showed up on the dinner table, making regular appearances on plates and in bowls, which we were expected to eat clean. As he made dinner, my father would sing in Edo, his native language, while stirring up huge pots of stew—some bright red with tender hunks of goat meat, others a mustardy yellow with chicken legs and flecks of cooked-down greens floating in the thick broth. On Saturdays, he’d fry up a puffy treat called akara, a beignet-like fritter made from peeled black-eyed peas.

My parents would later divorce when I was thirteen, and following their separation, my brothers and I lived with my mother. I wasn’t nostalgic about my father’s parenting, but I did miss his cooking. Even though African immigration to the U.S. is high (it doubled over the past decade to nearly 1.7 million, Nigeria being one of the top origin countries), my father’s native food has not yet hooked into the ethnic dining mainstream. I find that strange, particularly in the South, where the food remains so close to its West African origins. Gumbo is a logical derivative of ogbono stew, and jambalaya is a cousin to jollof rice. Nigerian cuisine is as diverse as the people who make up the country and its many tribes and languages, but generally relies on beans, plantains, and rice—all common to the modern American palate. For anyone who enjoys the flavors of India, Ethiopia, Thailand, and even China, Nigerian food will place you in familiar territory. Not much goes to waste, dishes are made for sharing, and almost everything is spicy.

My Igbo friend says that, culturally speaking, most Nigerians don’t come to America to open restaurants. Rather, she half-joked, they come to get higher-ed degrees to become doctors and engineers—or, in my dad’s case, a professor. Despite these obstacles, a handful of restaurants prevail throughout metro Atlanta, two worth a visit in the strip malls of Marietta. Visitors should take note that Nigerian restaurants can be hard to find, as they almost never include the word Nigeria. Proprietors prefer African and Caribbean instead. I’ve been told it’s more marketable that way. Also, because many dishes share a fanbase up and down the West African coast, multiple cultures identify with the same offerings. At Toyin Takeout, a three-table shop off Austell Road in southwest Marietta, most customers were born in Nigeria. Many of them come daily or buy dishes in bulk for the week. Owned by Abdul Kokumo, Toyin (pronounced “toin”) features a smoky jollof rice made with stewed tomatoes and onions and a steamed tamale-like moin moin: brown beans blended with red bell peppers and Maggi bouillon cubes, wrapped in foil. Like other small eateries à la Buford Highway, Toyin always seems to be out of something, but I guess that’s part of the charm. I’m drawn to the egusi: ground melon seeds stewed with tomatoes, bell peppers, and stockfish (dried and salty white fish), served with stewed meat or fish. You eat it by hand; scoop up a ball of pounded yam, steaming hot and doughy in texture, and dip it in the bright yellowish-orange egusi between sips of Vitamalt, a non-alcoholic beverage that’s somewhere between root beer and brown ale.

Down the street, Fad Fine Dining is just as communal as Toyin but channels a sporty vibe. The large space is filled with pool tables, flatscreen televisions, and giant Nigerian flags hung throughout, with curved booths against a wall. During my last visit, the owner, Fad, introduced me to suya, a ubiquitous Nigerian street barbecue of slightly sweet grilled beef caramelized in a spicy marinade and served kebab-style with a side of dried red peppers, sliced onions, and fried plantains. After the suya, he brought a bowl of fish pepper soup with a side of rice and asaro, a spicy yam porridge. Laid across a bowl of light brown broth, a whole tilapia—scales, bones, eyes, and all—stared blankly up at us. “Oh my God,” I said. My friend laughed. We edged the fish to one side and spooned the soup, deeply peppery with notes of lemongrass and scented herbs. It seemed like it had simmered for days. The fish flaked open, earthy, aromatic, and tender. Fad appeared to check on us, curious how the non-native was faring. The dish was new to me, I said, but the flavors—their essence—were like something I had been trying to remember for a long time. 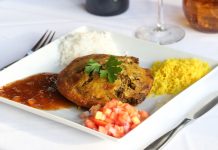 A quick primer on African food in Atlanta