For some people, starting a farmers market in their neighborhood just isn’t enough. No, they have to go and build the whole farm.

That’s what’s going on in East Lake. The folks who run the East Lake Farmers Market are turning the 1-acre site—at the corner of Second Avenue and Hosea Williams Drive—into an urban farm. (The market will move to a shaded lot next door.)

Imagine 75 long, raised beds, each 16 feet long and 4 feet wide, lifting plants 2 feet above the concrete surface. That’s more than a tenth of an acre of concentrated growing space. In the center of the lot stands a high-tunnel greenhouse. And toward the back, in the shade, room for growing edible mushrooms.

“I’m thinking that we’ll probably be able to feed 100, 150 people with the growing space,” says market and farm manager Lou Linzie. “That might go up, over the course of the summer.”

The Saturday market will open earlier in spring and close later in the season, operating form April 14 through Nov. 17. And across Second Avenue, the East Lake Community Learning Garden will add beds and greenhouse space, and it will install learning beds at the Villages of East Lake as well.

The ambitious project is being funded by a Communities Putting Prevention to Work grant from the Centers for Disease Control and Prevention via the DeKalb County Board of Health. The market won the grant, more than $80,000, in partnership with the Southeastern Horticulture Society, which will manage the educational aspects of the project, as it does at the community garden.

The goal is to make more good food available at affordable prices to East Lake residents. That might be done through a work share program, special pricing through the market’s weekly subscription program, or possibly a weekly farm stand at the Villages of East Lake, Linzy says.

“There’s a significant group of people in the community who are not on food stamps, but they’re still supporting a family on less than what seems possible,” she says. “The thing I’m really excited about is, the opportunity to create a new type of consumer who can actually understand the work, time and energy that goes into growing the food that they’re eating.”

Of course, there’s nothing quite as grass-roots as a farm, and like all grass-roots programs, this one has to be built from the ground up. To that end, organizers are hosting a volunteer day on March 17. That’s right, St. Patrick’s Day. So skip the parade and do something really green: help build a farm on the once-vacant lot that is becoming the most vibrant corner in East Lake. 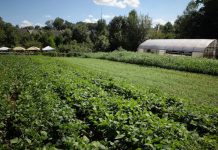 Farm to Garden Sale part of a wider mission