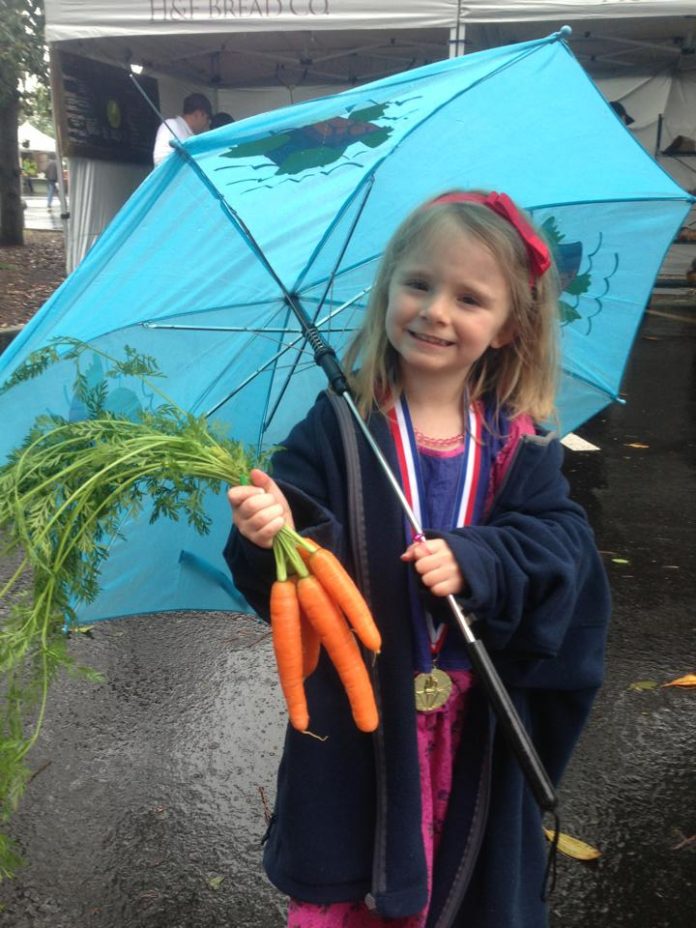 When it rains, it pours.

Literally. And figuratively, too, for Paula Guilbeau, owner of Heirloom Gardens. After relocating her farm to Dahlonega this spring, the fields were still freshly graded when the rain started falling. The water turned new fields into mud pits–destroying her first tomato, squash, and flower crops.

On Monday, while spreading hay on walkways to make a path to her muddy fields, Guilbeau slipped. She broke her ankle. “I heard it pop. It was horrible,” she says.
Now she’s laid up, unable to bear any weight on her foot for two weeks, while her partner tries plant what he can in their partially constructed greenhouses. He’ll have the assistance of a new employee; their previous hand quit on Tuesday.

Guilbeau has it especially bad right now, but lots of local farmers have struggled during this cool, rainy spring. They can’t operate tractors in wet fields; they can’t dig potatoes; they can’t sow seeds that will be washed away by the next rain. Wet conditions can spread disease among susceptible plants, wiping out entire tomato crops in a matter of days. And of course, only hardcore customers shop at outdoor farmers markets during downpours.

“It’s been a challenging year, weather-wise,” says Robin Chanin, director of farm operations for Global Growers Network, based in Stone Mountain. “Everything’s just several weeks behind. Agriculture is all about timing, and everyone’s timing is way off.” With the collective’s training farm, Bamboo Creek, in a flood plain, GGN farmers raced to get garlic, onions and potatoes out of the ground before they rotted, while some above-ground crops like squash got swallowed by weeds.

Burge Organic Farm in Mansfield has lost nearly half of its planned production this year, farmer Cory Mosser explained to CSA members in a recent e-mail. “All crop plans have been completely tossed aside at this point,” he wrote. “According to plan, we should be swimming in tomatoes, harvesting hundreds of melons, and consuming our weight in blackberries every day. Reality has been much more waterlogged, fermented, split, bland and diseased than any farmer with a seed catalog in January could have predicted.”

Farmer John Davis, in just his second year of production at Cosmos Organic Farm in East Point, has also been hit hard, especially in his tomato crop. “Probably a few hundred plants that were looking good on Monday were covered in yellow leaves by Wednesday,” he said last week. That’s because Davis was forced to harvest fruit from wet plants in order to get them to market, and that likely spread disease from one organic plant to another–though the plants continue to produce beautiful fruit for now. Although several beds of seeds for other crops have been washed out by rain, he remains optimistic that his fall transplants will fare better.

Though the rain has mostly brought delays and damage, some have found a silver lining. Farmer Hudson Rouse has used the cool weather to his advantage, producing a late-season crop of radishes and turnips that have been snapped up by local restaurants. Usually, radishes turn hot and woody under the summer sun. But his “desperation” crop has sustained him at a new farming location while his usual profit-makers, Mortgage Lifter heirloom tomatoes and sweet shishito peppers, have languished.

“Every aspect of what we do is affected by the rain,” says Davis. “But if it wasn’t raining, I’d be bitching about that.” He admits, though, that it would be nice if Nature would help out by providing exactly one inch of rain every eight days.

The farmers don’t ask for your sympathy; they simply request your patronage. Just now, weeks late, traditional summer produce like peppers and eggplant are making their appearance at local farmers markets. The farmers just need customers to come out and buy them.

“People don’t want to hang out at the market when it’s raining, says Katie Hayes, director of Community Farmers Markets, which operates the East Atlanta, Decatur and Grant Park markets. Although shoppers still seek out summer favorites like tomatoes, overall sales have been lower than expected, she says. But Hayes promises that customers who endure the sporadic showers and come to market will still find plenty of great produce and other products to make the trip worthwhile. “As long as we’re not putting anyone in danger, we’re going to be out here selling.”