My brother, who lives in Denver, and I share a (mostly) good-natured rivalry between the Rocky Mountains and the Appalachians. I have certainly enjoyed the free accommodations when we’ve flown west to ski. And there’s nothing like the rush of pausing at the top of a back bowl on a clear winter day, with a cerulean sky framing the sparkling snow at your feet. But that’s precisely my point. To me, the Colorado peaks are all about adrenaline. Even in the summer, you’ve got to be stoked to tackle a fourteener. Stay high up in the Rocky Mountains too late, and you risk getting struck by lightning. Dally on your way down in the Blue Ridge, and—worst case—all of life’s hard edges melt into a gentle fog.

Having grown up in North Carolina and Tennessee, at the foot of the Great Smokies, it took me a few years to appreciate Georgia’s gentler version of Appalachia. But I’ve grown to love how those hills seep almost into the metro area. You don’t have to head far north to enter the embrace of rolling green highlands.

I’ve also discovered that Georgia’s state parks are among the best places to explore our mountains. One of the first I visited was Vogel, which is among the oldest in the state’s system. It’s simply impossible to believe this historic, verdant haven is just over 20 miles away from rollicking Helen. And I’ll put the views in Cloudland Canyon, Tallulah Gorge, Fort Mountain, and Black Rock Mountain state parks—especially when the leaves turn—up against anything in New England.

Which brings me to this month’s cover story. I know fall is also a great time to visit the beach—and that, like the forest foliage, marshlands turn to tawny golds and saffrons as temperatures cool. And I recognize that our feature has a strong northward bias. For the record, we do visit Fort McAllister, located south of Savannah on the Ogeechee River. (Little known fact: The stronghold actually marked the end of General William T. Sherman’s “March to the Sea.”)

So, Georgia coast, I owe you one. Round about April, I’m sure I’ll be craving the salt air and the sound of the ocean. And my brother and I will be arguing about whether the best beaches are on the Atlantic or the Gulf. 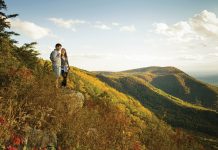 Editor’s Note: City of the Future