Home Uncategorized The Highest Office in the City

The Bank of America Plaza on North Avenue is the tallest skyscraper in America outside New York or Chicago, and its upper reaches have their own weather. Large moths ride air currents to the pyramid atop the roof and get stuck here, because the wind won’t let them down. A wayward red-tailed hawk was once rescued from a metal enclosure just below the spire, 1,023 feet above Midtown. In winter, ice forms on the steel pyramid, then falls toward the flat roof, occasionally shattering one of several dozen upward-facing lights that give the pyramid its nocturnal golden glow. Then it’s time to call Al Buhler. “My daddy changes lightbulbs,” Buhler’s young son once told the kids at school, which is not unlike saying President Obama works for the government. Buhler has always loved heights, even as a boy in Savannah, when his mother scolded him for climbing the 100-foot pine in their backyard. Sometimes, before he leaves the tower in the afternoon for his drive back to Lawrenceville, he looks down at the Connector to see how traffic is moving.

We are climbing, Buhler and I, up a ladder toward the spire, which is partially covered in 23-karat gold leaf. I’ve taken his advice and buttoned my notebook into my shirt to free my hands, which have turned reddish-brown from the rust of the ladder rungs. It’s been a while since the pyramid was repainted. Imagine the labor cost.

Electricity flows into the tower through the basement, at 4,160 volts, to a hot, damp room full of roaring machinery. The Georgia Power bill was $181,000 in June. Engineers watch the temperature of every zone on every floor, down to one hundredth of one degree. In the summer they keep it around 74. The attorneys of Troutman Sanders occupy the top fourteen floors. They need cool heads to defend Georgia Power against frivolous lawsuits.

The City of Atlanta delivers water to the basement at 70 pounds per square inch. Bright yellow pumps increase that pressure sevenfold, firing the water toward the sky so the partners of Troutman Sanders on the fifty-fifth floor can win summary judgments with clean hands.

The red granite tower opened in 1992, and it was at full capacity—nearly 5,000 workers—until 2007, when the economy began to tumble. Now it stands about half full. The tower was built to sway gently in high winds, so as not to topple, and if you stand on the fifty-first floor near one of the building’s thirty-one elevators on a blustery day, you might see the chandeliers swinging. “But the chandeliers aren’t swinging,” Michael Howard, the building’s chief engineer, says with a slightly ominous air. “You are.”

After climbing the first ladder, Buhler and I stop at a landing. He points outward, toward the network of steel girders along which he must climb to replace the golden lights. The girders are about six inches wide. He says he is not afraid to walk them. He wears a safety harness. It has never come into play.

Another ladder, another landing. A third. A fourth. A fifth. The breeze is soft, the air still hot, the Georgia Dome a distant marshmallow. We are above Stone Mountain, above the helicopters. This is as high as Buhler will take me without a harness. We are still eight ladders below the spire, which has a flashing light on top to warn airplane pilots. Guess who comes when the bulb burns out. Once he got the call at eleven on a rainy night and he rode the elevators fifty-five floors and he climbed these thirteen ladders with the bulb buttoned into his shirt and he screwed it in and he stood up there in the rain above the city and he was not afraid. 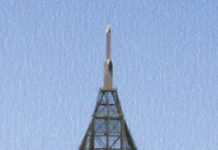