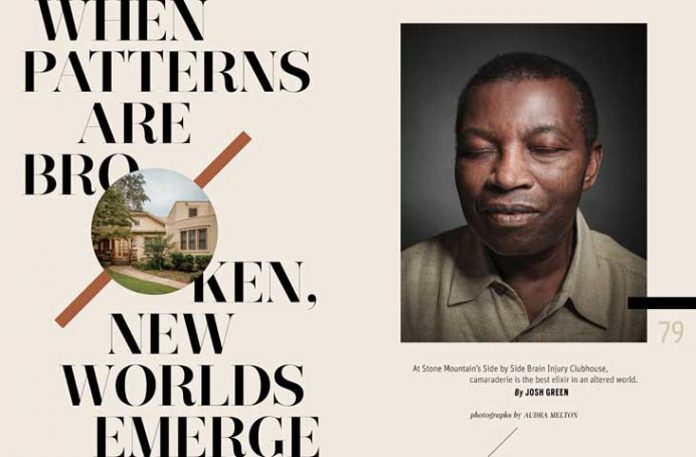 This story originally appeared in our October 2012 issue.

One balmy morning at the Riverdale Park & Ride, a former pharmacist in olive-colored khakis named Bisi Alabi boards the Route 442 bus. He walks to the back, picks a seat, and lays at his feet a zippered tote bag stuffed with handwritten mementos, chaotic personal logs, and vital phone numbers for his doctor and his destination: the Side by Side Brain Injury Clubhouse in Stone Mountain. Since his traumatic brain injury, the doctors won’t let Bisi—pronounced be-see—drive across town, despite his insistence that he still can. He yearns to greet his pharmacy customers and dispense their medications as he did for twenty years, but that is now beyond his cognitive grasp. Forgetting his wallet or MARTA card will cast him into a confused tailspin, yet public transit is a gantlet Bisi feels he must run, or else be left in an empty house, in a neighborhood drained of residents during work hours, in a world that has all but left him behind.

More than an hour later, Bisi arrives at the Clubhouse, a 1920s bungalow dwarfed by an odd art deco–style addition, overlooking Stone Mountain’s quaint Main Street. Like Bisi, the fifty men and women who make up the current clientele—known as “members”—were once more proficient people. They were respiratory therapists, semi drivers, attorneys, roofers, restaurant managers, from every socioeconomic tier and fourteen different countries. Now they find respite among the similarly afflicted in this two-story complex with creaky old floors and an elevator. It’s the only facility of its kind between Raleigh and Jacksonville.

While 65,000 Georgians and 1.7 million Americans suffer traumatic brain injuries each year, advocates say alarmingly few receive appropriate care and life-skills training after leaving the hospital. That explains why some members travel more than two hours each way, as often as five times a week, for day visits. Without the Clubhouse, many would rarely leave their homes. “This gives them the opportunity to not be a patient,” says Cindi Johnson, the wispy-haired mother hen who is the nonprofit’s executive director.

Formerly a cognitive rehab therapist and a program director at the Shepherd Center, Cindi was commuting one morning in 1987 when the van in front of her suddenly stopped. The impact flipped Cindi’s Datsun, and she was left hanging by her seat belt, screaming for help, with shards of glass punched into her scalp. Though the mild brain injury she sustained would resolve in a few weeks, the crash showed Cindi what it was like to be confounded, to become forgetful and confused. She later partnered with a colleague from Emory Healthcare, Mike McCord, and with $100,000 from each of their hospitals, they began gauging the need for a brain-injury refuge. In 2000 the Clubhouse opened with three members in the basement of a Decatur office building, and it quickly became cramped.

Today Cindi surveys the cafeteria as sloppy joes and Ruffles are dished from the industrial-grade kitchen. She points to a man who plummeted from a high-rise as a boy, another two who fell down stairs, a brain aneurysm victim, and a guy who bounced off a golf cart. It’s common to see avowed conservatives lunching with possibly undocumented immigrants, people injured by drunk drivers happily hobnobbing with those injured while driving drunk.

Three training areas—business, food preparation, and household maintenance—equip members to run the Clubhouse. The instruction also helps them rebuild social, physical, and cognitive skills. When a brain bounces inside the skull, when axons are torn, the slightest change causes rudimentary abilities to fall by the wayside. At the Clubhouse, twelve rehab, educational, and social-work professionals work directly with members. Programs are supported primarily by member fees, which range from $1 to $200 per day, based on income—and incorporate funds from outside sources like Medicaid waivers and worker’s compensation. Some members will move on to janitorial or clerical jobs, scaled-back versions of their former professions, or entirely new careers. Others—like Bisi and his colleagues Ray, Haile, and Cheryl—have no intentions of leaving.

Six days before Christmas in 2003, Bisi and his wife Deborah were driving home from Louisville in a rented SUV when they skidded on black ice and shot across I-24, into a ravine. In the ambulance, paramedics started an IV, and Bisi’s vital signs finally sparked. But ask Bisi—a diminutive, playful man with a smile so gaping he appears perpetually on the brink of laughter—and he’ll say he did die, all the way. Through a memory hiccup called confabulation, he tells a vivid fictional account of his death, saying he was bound for the mortuary when Deborah, a nurse, bore through a team of doctors to hug his “corpse” once more, latched onto his wrist, and, through the intervention of God Almighty, felt . . . a pulse.

Given his cache of reminders, the last thing you’d expect from Bisi is a rich retelling of his personal journey, but distant memories are easily fetched. He emigrated from Nigeria in 1973, where his guava-farmer father married into royalty via Bisi’s mother. A workaholic, he earned a bachelor’s degree at the University of Florida and his doctorate at Mercer University, eventually becoming a pharmacist at Southern Regional Medical Center. His eldest son is now a pharmacist in Las Vegas.

Among a splash of freckles on Cheryl’s face sleeps a glass eye that does not blink. A faint indentation leads from her reconstructed mouth to her short, curly hair. It’s the path carved by a 9 mm bullet four years ago, when Cheryl was an assistant manager at a Krystal restaurant in Stockbridge. A twenty-one-year-old kid, whom another manager had fired, entered a back door with a handgun, swiped $1,000 from a safe, and hustled Cheryl and another employee into the walk-in cooler. He fired twice into her left arm and once into her face. A jury sentenced him to a lifetime in prison.

Cheryl’s psychological wounds are deep—sandals slapping on a sidewalk, for instance, cause her to flinch—but she has stopped hiding from strangers in Clubhouse bathrooms. These days she lives with her sister, who longs for the old Cheryl, a person who no longer exists.

A former teaching assistant, Cheryl hopes to volunteer at an elementary school. She loves her water aerobics class. Recently a busload of tourists stopped by the Clubhouse. Cheryl agreed to give an impromptu speech, to tell her story, as long as Cindi stood next to her, patting her back for support. Her words inspired hugs from strangers, and though she tried not to, Cindi wept.

Haile Woldu, fifty-five, Atlanta
Haile is a soft-spoken but convivial Ethiopian expat who arrived in America in 1987 with two master’s degrees and hopes of earning a Ph.D. in environmental chemistry. Those plans did not materialize. Haile’s brain injury is the work of robbers who beat him into a coma with baseball bats in 2001, as he was trying to make ends meet on the night shift at a convenience store near Decatur. Haile doesn’t know if his assailants were caught, and he doesn’t really care. He recalls his manager leaving the store that day, then awakening from the coma more than two months later at the Shepherd Center, confined with soft restraints.

A decorative plate hanging at the Clubhouse bears this heartening motto: When patterns are broken, new worlds emerge. Ambition can be the greatest casualty in an altered world, but life offers compensations. Haile’s simplified daily goals include ushering his two sons, ages six and eight, to school via MARTA. He lives vicariously through the boys, both excellent students. He frequently meets with a Clubhouse tutor to practice independent-living skills, plunking down a thick yellow folder and sorting out school bills and Social Security paperwork. He incessantly asks himself, “How can I contribute to society?”

To the beer-swilling, Mustang-driving wild man Ray used to be, skydiving was addictive, if unsatisfying—like “chasing a rainbow I would never catch.” His injury may have resulted from calculated risk, but how could Ray have known his chute would fail on jump number 2,309?

On that spring day, as he did most weekends, Ray packed his rig, rode a Queen Air to 15,000 feet, and leaped out. As his helmet video camera recorded, Ray’s chute only half inflated. He kept looking at his chest-mounted altimeter and fussing with the chute until it was too late for the reserve. Thudding on the hard red clay of Thomaston, Georgia, much of his right side was crushed. Ray stopped breathing until a fellow skydiver landed nearby, rushed over, and performed CPR.

Ray has tricks that help. He wears white sneakers with two Velcro straps, an L and R written neatly atop them in black marker. His Smyrna condo is dotted with reminders, such as “shut the door” on his fridge and “flush after #2” on the toilet. He’s enthralled with History Channel war documentaries, but in the wee hours he sometimes falls prey to infomercials. “My mom threatened to chop up my credit cards,” says Ray.