Robert Phalen first drew attention for his outside-the-box cooking at East Atlanta’s Holy Taco, offering empanadas stuffed with oxtail meat and grilled sardines alongside brisket tacos. This new venture from the Holy Taco owners, in the space previously occupied by Shaun’s, gives Phalen a laboratory where he takes his experiments further. The menu changes constantly but recently included roasted pork tongue and belly with mustardy potatoes, snails with garlic and chile sauce, and, for slightly less adventurous palates, seafood stew with tomato-almond broth. If your Sunday needs shaking up, try Phalen’s brunch, which includes a stunning rendition of shrimp and grits with spinach and andouille sausage among waffles and gently scrambled eggs.

Best of Atlanta 2013: Under-the-Radar Restaurant
Hard-core gastronomes frequent this Inman Park bistro and food writers lavish praise on it, but its dining room crowds remain disappointingly thin. Y’all are missing out. Robert Phalen is the wild child among Atlanta chefs, and his restless imagination conjures some of the most unlikely but satisfying food in the city. For every seeming oddity (yes, he’s been known to make pastrami from beef heart), there are many more lilting creations like celery and apple salad with Parmesan and pistachio vinaigrette, or trout poached in bacon broth with pickled long beans, almonds, and brown butter. Perhaps to tempt the masses, Phalen is no making a killer double-stack cheeseburger he calls “meatstick”; try it from the regular lunch menu or in the evening upon request. 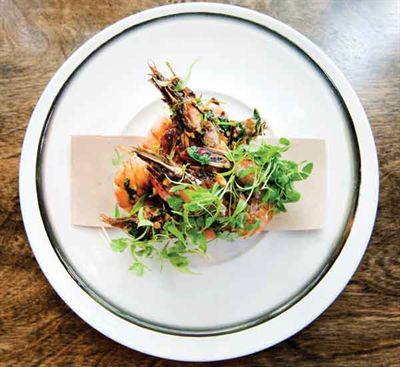