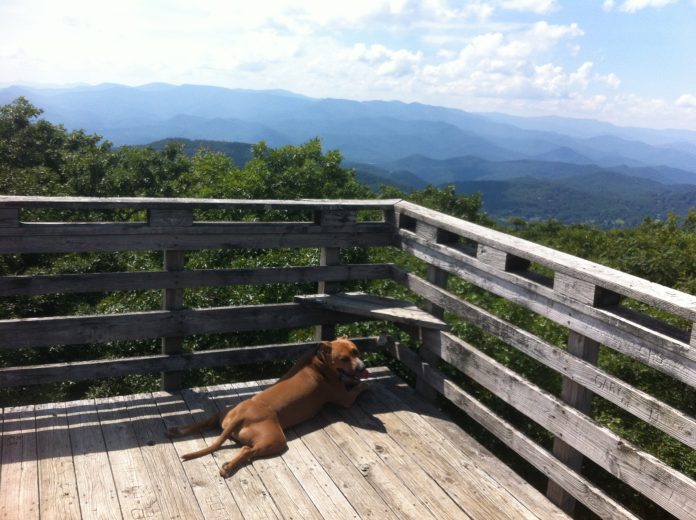 This past Sunday, I summited Georgia’s second highest peak with three friends and my dog, Walter Ray Miles Davis (Jr.). Miles, as he prefers to be called, is a seventy-five-pound pit bull mix, whom I adopted about a year ago from a local group called Animal Action Rescue. They had found him in a Dekalb County kill shelter, where he was eating cockroaches; he was on the soon-to-be-put-down list. He had (and still has) a white scar all the way around his tan lower belly where, I fear, he was tied up tightly with a sharp wire that cut deeply into his thin fur and skin. I sometimes fantasize about finding the person who allowed this to happen to a puppy—to my puppy—and doing something similar to him or her.

Anyway, Miles appears to have no physical pain on that part of his body anymore. But if a stranger who smells of cigarettes (like his abusers) reaches for him there, as my out-of-town friend Alex did just this afternoon, he’s liable to growl or even strike. It’s scary, for man and dog alike. For this reason, taking him anywhere outside my home, or my parents’ homes, can be a bit nerve-wracking. When we go for walks around Cabbagetown, where we live, he’s the sort of dog people either rush over to pet—he has a handsome face, after all, which will one day land him a role in a film, allowing us to live solely off his royalties—or cross the street to stay away from that big mouth of his. We go on lots of walks and runs together, nonetheless, which last about fifteen minutes in the heat of summer. By the end, his heavy panting has me worrying about canine heart attacks.

Worry and love: I suppose these are what I’ll feel when I finally have a child of my own. For now, they are Miles’ gifts.

So it was with some trepidation, and doubt about my dog’s aerobic fitness, that I brought Miles with me to the woods this past weekend to climb 4,696-foot Rabun Bald. To get there, you drive two hours north to Clayton, Georgia, and then head east on Warwoman Road for about fifteen minutes to a forest service road. It’s another fifteen minutes up this gravel road—recently rutted by rain—to a modest turnout where Rabun Bald Trail begins, inconspicuously, on the left. It’s 2.9 miles and 2,200 feet to the top, where we’d read there is an observation tower.

It took us two hours or so, through a coniferous forest, alongside a stream, past a rattlesnake and a few beautiful campsites to reach the top. Along the way, Miles stayed close. He followed the trail, mostly, and patiently looked back at us when we dragged too far behind. I waited for him, too, when he did his share of dragging. We shared the same bottle of water, once the stream departed. I carried the leash in my hand, ready to pull him close if danger—human or ursine—approached. I knew what he’d do if a strange human got too close. But what about a bear? No matter: we didn’t see any of either. The trail, thankfully, was all our own.

Miles may have considered turning back at some point, as the rocks turned steep. But he didn’t. Finally, just ahead of me, he climbed the steps to the wooden summit tower, where a few people stood gaping, and surveyed the view: more than fifty miles of green mountains and valleys, with the occasional town, in every direction. Soon he found a thin spot of shade and lay down, paying no attention to the strangers. I joined him there for a few minutes. Then we headed back down the trail to the loud, busy, sometimes scary city. He seemed to have mixed feelings about this, as did I.