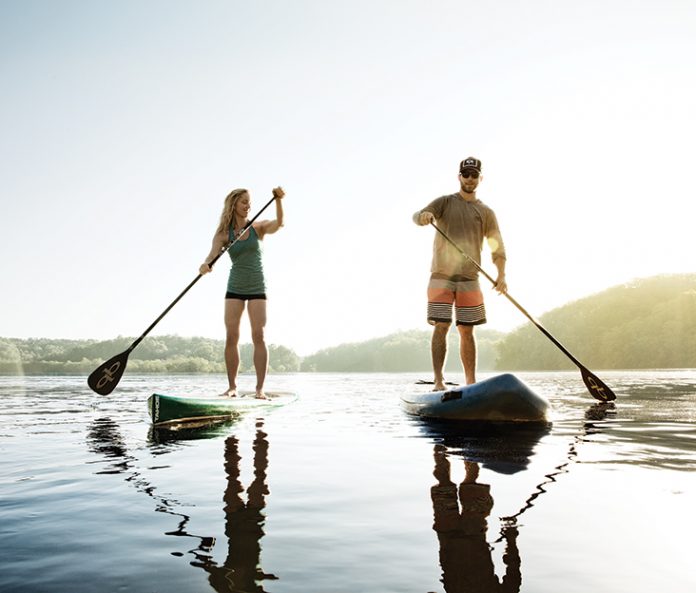 I was worried about the woman in the blue maxi dress, its hem so long she nearly tripped while selecting a stand-up paddleboard at Morgan Falls Overlook Park in Sandy Springs. But then she paddled out onto the glassy Chattahoochee River like a Venetian gondolier.

The instructors from High Country Outfitters generally don’t recommend you dress like you’re going to brunch when you first try stand-up paddleboarding. But the woman’s success told a truth about the sport known as SUP: It doesn’t take serious grace or athleticism to get started.

That may be why paddleboarding has become so popular, with a recent study showing that SUP had more new participants in 2012 than any other recreational activity. Or maybe it’s all those photos of a bikini-clad Jennifer Aniston astride a board in a tropical locale, working on her enviable abs.

I covet that kind of core, so I signed up for High Country’s weekly demo of boards for purchase.

“Dude, this one is really sturdy,” said Caroline Peters, an instructor who teaches SUP yoga and has the buff arms to prove it. “It’s rad. You could fish off of it.”

I didn’t try that kind of multitasking in class. Per Peters’s instruction, I positioned the board along the edge of the dock, then slowly knelt on it. And I began to float away.

Standing up was a little nerve-wracking, especially once I heard the yelp and kersplash of a classmate whose stance had looked like that of a kid on ice skates for the first time. I carefully put one foot on the board’s rubbery surface, then the other, coming to standing. Then I dipped my paddle in, tore it through the water, and off I went. I could tell my midsection and arms were getting a workout and that balancing on the board for a long paddle would give my legs a good ache, too. I floated up to surfer-girl Peters. “Do people fall in much?”

Where to get your SUP fix:

High Country Outfitters
Demos Thursdays at Morgan Falls Overlook Park, plus yoga on Sundays. $25 demo, $50 yoga ($25 if you BYO board).

Shoot the Hooch
Hourly and full-day rentals; classes include SUP 101, SUP yoga, and Paddle­Fit—a workout on the water. $25 for a one-hour rental, $30 for a class, $60 for a private class.

Urban Currents
Two-hour introductory class on Saturdays and Sundays for $93.

This article originally appeared in our August 2014 issue under the headline “Paddleboard Abs.”