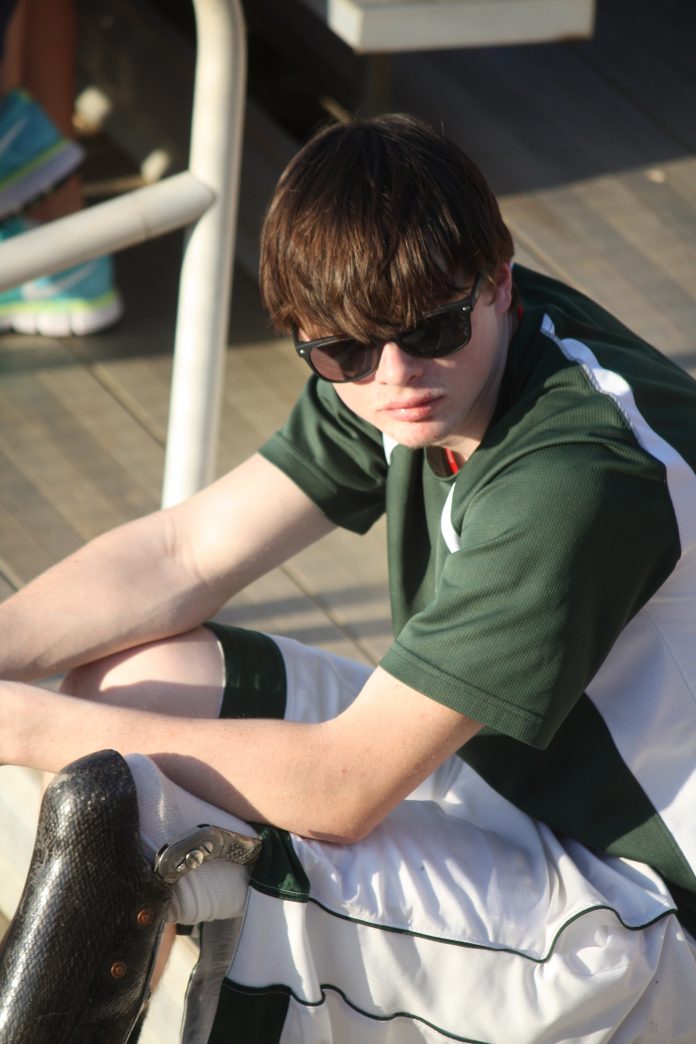 Sean Dever was eleven when he knew he was going to lose part of his left leg. That’s when he was diagnosed with a malignant bone cancer called osteosarcoma. To remove the cancer, he had a procedure called rotationplasty, where part of his leg was removed. Now seventeen and a junior at Blessed Trinity Catholic High School in Roswell, Dever plans to eventually make prosthetics for a living—hopefully after going to college on a wrestling or lacrosse scholarship.

Dever knows all too well what some of the survivors of the Boston Marathon bombings face—living life without a leg.

What do you think the victims are going through?
Probably when it first happened, they were just in a lot of shock. I know in the hospital, with my experience, it was scary. And I had a lot more time to cope with the realization. Theirs came out of nowhere. I think most people are afraid and that’s a really natural thing. But eventually, there’s the whole realization that it’s not that big of a deal as long as you’re still alive.

With me, there were some days where I thought it was the worst thing. But other days I knew it was such a better alternative than not being here.

What was your reaction when you heard their news?
I thought of them like veterans who lost their legs in wars. The whole bombing situation really shocked me. As I thought about it more, I knew there are so many amputees that run marathons. With the advancement in prosthetics, if they have the will they’ll definitely get out there.

What challenges will they face emotionally and physically?
The physical ones are apparent. There’s pain, there’s discomfort. The first prosthetic is always the hardest one. You’re not used to something like that at all. I saw other people with prosthetics and noticed what they could do. When you’re first starting out, you want to be able to do that stuff immediately. It’s like starting a new sport. Like kids starting football and they want to do what the players do in the NFL right away and they can’t.

How many prosthetics have you had?
Eight or ten. I grow a lot. Everyone has an adjustment period. I’ve had ones I like better than other ones, but I didn’t like the first one at all.

What’s it like in the beginning?
There definitely are a lot of highs and lows. You want to be able to do something and then you realize that you need more work to do it—not necessarily that you can’t do it—you just can’t do it at that time. Once you do achieve it, it’s so much better.

What kept you going?
Lacrosse was my big motivation to run again and get back on the field. For the first couple months I couldn’t play I watched games on TV and went to my friends’ games. Those days were hard because I wanted to be out on the field again. When I did, it was an emotional high.

I think that will happen to them. Whatever they want to do, they’ll do it. It’s really a lot of joy once you accomplish it.

What were your triumphs?
I had sights on being a basketball player in high school. My brother wrestled and I didn’t really want to wrestle. I lost a lot of speed when I lost my leg, obviously. I picked up wrestling my freshman year. My first year was rough and didn’t know if I wanted to continue with it. I never really saw myself as a wrestler. This year, I finished top ten in the state for my weight class.

For lacrosse, I never, ever saw myself as a goalie. I always thought kids who played goalie were insane. It’s dangerous and it’s a solid rubber ball being shot 85 to 90 miles at you and it’s a little scary. But you get over that. Now I’m varsity goalie and being looked at by colleges here.

What are prosthetics like?
They’re crazy what you can do with them. There’s one, when you press your heel down, the toe goes down with it. It’s like a fluid walking motion. I think that’s really cool–the technology to be able to feel the pressure on the toe. Mine is a very athletic, high-activity type of foot. I also have a blade runner foot. They have so much spring. The technology that goes into those with all the physics . . . they’re awesome.