Semi-ancient Mariner
The ship’s voyage began in 1970 as the centerpiece of the original Dante’s Down the Hatch at Underground Atlanta. The restaurant hasn’t been open since the ’90s, but its ship, a large piece of machinery from an old candy factory, a brick well predating the building, and other eccentric accoutrements remain locked below ground.

Star Rock
An otherwise unremarkable stone, the Zero Mile Post denotes the center of pre-1850 Atlanta, the terminus of the Western and Atlantic Railroad. By the mid-1930s, much of downtown had been elevated over the rail lines, and the marker found itself a story below Central Avenue. Today, the state-owned building that was erected around it is closed to the public.

Tunnel Vision
The West Area Combined Sewer Overflow Tunnel is an engineering marvel. Drilled into bedrock some 20 stories under the city’s Westside, this monster hole in the ground is 24 feet around and more than eight miles long—the most ambitious project in Atlanta’s $4 billion sewer upgrade.

Future Hoarders
What will our distant descendants make of a Toast-O-Lator and Formica samples? They’ll have plenty to puzzle over when the Crypt of Civilization—sealed inside the foundation of a classroom building at Oglethorpe University in 1940, stocked with early-20th-century ephemera—is opened in the year 8113.

This article originally appeared in our February 2015 issue as a part of Hidden Atlanta under “What lies beneath.” 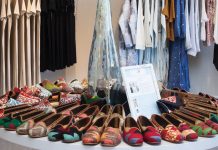