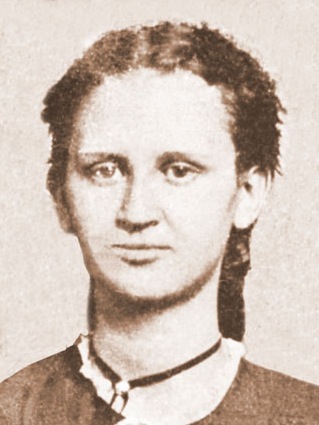 Atlanta wasn’t really planned. It just kind of … happened. Our streets follow the lines of former cow paths (which explains why I always get turned around on Moore’s Mill). And our name evolved in a similarly scattershot manner.

Our origins are in a Native-American trading post named Standing Peach Tree—or possibly Pitch Tree. That settlement evolved into Whitehall, a pit stop for white pioneers making their way into north Georgia. In the late 1830s, when the Western and Atlantic Railroad decided that this would be a good spot to terminate their new line, a marker was driven into the clay and the spot unimaginatively dubbed Terminus.

In 1843, when it looked like there might be development beyond the rail sheds and saloons clustered near the train tracks, the residents of Terminus decided the town needed a proper name. After some polite to-ing and fro-ing, the town was named Marthasville in honor of Martha Lumpkin, daughter of Wilson Lumpkin, Georgia governor, congressman, senator, and—perhaps most relevant to the naming honor—onetime general manager of Western and Atlantic. (Today he is best known for his role overseeing the brutal removal of the Cherokee Indians from Georgia.)

Martha Lumpkin, born August 25, 1827, was sixteen at the time the town became her namesake, and by all accounts a spirited belle. (I’m sure the photo above, courtesy Digital Library of Georgia, doesn’t do her justice.) Alas, neither her charms nor her dad’s influence were enough to persuade city fathers to stick with Marthasville. After just two years, movers and shakers grumbled that Marthasville just didn’t have the right zing. “It sounded too plebian for a growing town,” writes Elise Reid Boylston in Atlanta: Its Lore, Legends, and Laughter.

Credit for coming up with the name that stuck goes to J. Edgar Thompson, chief engineer of the Georgia Railroad, which had also decided to locate its terminus in Marthasville. Thompson shrewdly did so by giving props to Lumpkin’s W&A railroad, writing to city leaders: “The railroad from Charleston and Savannah has met the road just emerging from the wilds of the northwest. Eureka—Atlanta, the terminus of the Western and Atlantic Railroad. Atlantic, masculine; Atlanta, feminine. A coined word, but if you think it will suit, adopt it.” City fathers thought it suited very well, and the town was re-named Atlanta in 1845 and officially incorporated in 1848.

Wilson Lumpkin added his own twist to the tale, claiming that Martha’s middle name was Atalanta, for the Greek goddess of athleticism. So, he insisted, the city christening was a second tribute to his lovely offspring—never mind that pesky extra “a.”

In 1893, on the fiftieth anniversary of the naming of Marthasville, the Atlanta Constitution sent reporter Harry Hodgson to profile Martha Wilson “Atalanta” Lumpkin Compton, then a widow of sixty-six living in a granite house on the outskirts of Athens with her childhood mammy, Judy, and a big yellow dog named Jeff. Martha told Hodgson that her name had been recorded in the family Bible as Martha Wilson and her parents  later added an “A” because of her nickname Atalanta, which came about because she walked at an early age. She dismised as “a very peculiar coincidence” that Atlanta was so close to her nickname. Judy, she said, still called her “Miss Atty.”

Martha Lumpkin, who lived to the age of ninety, is buried in Oakland Cemetery. While Marthasville is a blip in our history, her father’s name has had more staying power. There is a Georgia town called Lumpkin, not to mention a county, a major thoroughfare in Athens, and a building at the University of Georgia, of which Wilson Lumpkin was a trustee. The Lumpkins deeded the building, which is where Martha was living when Hodgson made his visit, to UGA along with a sizable portion of land, on the condition that if the house was ever demolished, the university would have to give up the property, too.