Home Uncategorized Alton Brown’s vacation hideaway is in his backyard

“I don’t go on vacations, so I wanted a vacation in my backyard,” says Alton Brown, adding emphatically, “Not a ‘vacation house,’ because they’re actually a lot of work. We wanted it to be a vacation to come out here.” The low-maintenance destination is a resort-like pool house a few feet from the Browns’ historic Marietta house, yet the vibe is more tropical than traditional. “The architecture definitely has sort of a Caribbean feel,” says interior designer Dana Poor. “We knew we wanted shutters instead of doors and didn’t want to heat or cool the space … It’s open like this in all seasons.”

Even though trees were leveled to add the pool and pool house, the structure is integrated into the landscape—and most important to Brown, not visible from the street. Privacy is a top priority for the two-time James Beard award winner and star of perennial favorites like Good Eats and Iron Chef America. Brown is currently hosting a new show, Cutthroat Kitchen, where he not-so-subtly provokes contestants to sabotage each other.

Brown and his wife, DeAnna, think of the structure as a cabana, an open-air house with just the basics: outdoor sitting area, bathroom, laundry room, and, since it belongs to a chef, a fully equipped kitchen. “I like to think of it as a kitchen with a full porch attached,” says Brown.

The designer chose all-weather wicker for the front porch living room and Ipe, a Brazilian hardwood, as natural flooring, both of which can be hosed off. A custom, zinc-topped picnic table can comfortably seat ten or so. Poor added touches of color—bright green table legs, patterned pillows, neon-colored woven stools—but mostly kept furnishings neutral. Inside, the island is repurposed from a French commercial kitchen and retrofitted with a pot rack. Pendant lights are made of oversized whisks, paying homage to Brown’s profession. This space was designed for serious leisure, but nothing is taken all that seriously.

This article originally appeared in our March 2014 issue under the headline “Hometown Hideaway.” 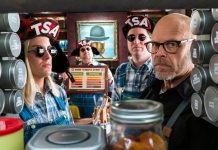