This spring will mark the last time nursery owner Carole Simpson welcomes winter-weary gardeners to her Ashe-Simpson Garden Center on Peachtree Boulevard in Chamblee. The nursery, which Simpson opened in 1998, is part of a 11.12-acre parcel that S. J. Collins Enterprises, a commercial real estate development firm in Fairburn, plans to develop.

Simpson said she hasn’t been told when she must vacate, but thinks it could be sometime in the summer. As of now, she plans to offer a business-as-usual full inventory of plants for the spring gardening season.

After that, she’s not sure what direction her business will take, although she will likely downsize her retail operations. “I’m still sorting this out,” she said. “I’m looking for another location in the area, but I know I won’t have this kind of space. I’m hoping to find a house with maybe a little bit of land.” She does plan to keep her garden design business.

Simpson’s uncertain future is another sign that the retail plant business has become a difficult row to hoe for owners of private, independent garden centers in Atlanta. “This is a dying business,” Simpson said with a sigh.

Privately owned Habersham Gardens closed its retail nursery operations in 2014, keeping its landscape, maintenance, and irrigation business. Scott McMahan, owner of GardenHood in Grant Park, which could become the only remaining privately owned garden center inside the Perimeter, doesn’t relish the thought of possibly becoming the last man standing. “It is sad and a bit scary,” he said.

The site plan that S. J. Collins has submitted for the land where Ashe-Simpson is located calls for the garden center and several other businesses to be replaced with an organic grocery, a bank, and several restaurants, according to Adam Causey, Economic Development manager for the City of Chamblee. The tract is bordered by Peachtree Boulevard on the West and Peachtree Road on the East.

S.J. Collins has a contract to acquire the land but has not closed on the deal, according to Jeff Garrison, a partner in the firm. The goal is to start construction the latter part of the year, Garrison said. He characterized the plans for the site, which would be called Peachtree Crossing, as a lifestyle center that would include stores offering boutique retail and everyday essentials. The anchor tenant would be a Whole Foods, according to S. J. Collins. 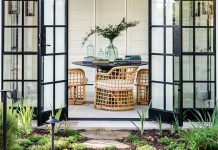 After a tree knocked down their freestanding garage, this Atlanta homeowner made a fine garden folly 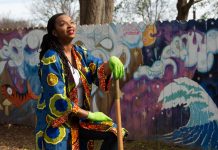 Restaurant and bar workers need to de-stress. A bartender created community garden to help with that. 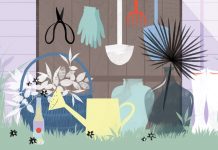