If the medium is the message, as communications theorist Marshall McLuhan famously claimed, nowhere is this more evident than in the work of Atlanta’s Jon Eric Riis. Many cite him as the nation’s leading contemporary tapestry artist, known for weaving richly embellished textiles so masterfully executed that their loveliness nearly obscures their powerful satire.

Riis modernizes his 15th-century craft with timely themes. “I often address sociopolitical issues by reinterpreting textile techniques from various cultures,” he says. “Political events were a good start, especially the antiwar tapestries. I have always detested the armed services camouflage uniforms and wanted to produce the most elegant fabric of this type in silk and metallic thread with embellishments of Swarovski crystals.”

His camouflage motif appears in Greed (2006, collection of the Indianapolis Museum of Art) and its companion piece, Freedom’s Price (2005, on view at the High Museum). Blood-red stitches stream down from a hundred-dollar bill inside a camouflage jacket form in Greed, and from a deceptively innocent “Home Sweet Home” sampler inside the Freedom’s Price jacket.

Riis cites Congressional Constraint (2012) as one of his more powerful works. Now in the permanent collection of the Textile Museum in Washington, D.C., it will be on display in 2016. The museum chose Riis as one of 11 fiber artists to create works based on its historical collection. Inspired by the contentious election season, Riis interpreted the form of an ancient Peruvian Chimú tunic in red silk, with elephant and donkey symbols in straitjackets.

Riis inherited his love of fiber and art from both sides of his family. His Swedish maternal grandmother grew flax and wove household textiles, and as a child Riis was fascinated with her looms. His Norwegian paternal great-grandfather traveled from Oslo to demonstrate gilding at the Chicago World’s Fair in 1893. And both his paternal grandfather—a commercial artist—and his mother studied at the Art Institute of Chicago, which Riis himself attended before earning a master’s in fiber at Cranbrook Academy of Art.

“Because I grew up in a household that understood textiles, it was an easy adjustment to go into this field. I was not interested in dealing with commercial textiles but in the ‘art form,’ and I found tapestry the answer,” says Riis.

Growing up in Chicago, he also spent many weekends browsing the ethnographic collections, especially the Tibetan ones, at the Field Museum of Natural History. The textiles of pre-Columbian Peru and Imperial China, as well as Russian ecclesiastical vestments, have been special interests. Riis, who earned a Fulbright grant to study the indigenous textiles of India, still deals in and collects Asian textiles. “If I had not pursued textiles, I would have gone into anthropology,” he says.

Over his 40-plus-year career, Riis’s oeuvre is amazingly extensive. He has taught at several universities, including Georgia State, which brought him to Atlanta in 1970 to head its then-new fibers program. A founding member of MODA and recipient of numerous awards, Riis has clients from as far away as Saudi Arabia. He selected all the art and antiques for John Portman’s mammoth Shanghai Centre. And his work is in museums from the Metropolitan Museum of Art and the Art Institute of Chicago to the Smithsonian American Art Museum. Riis may be reached at riisjon@aol.com. 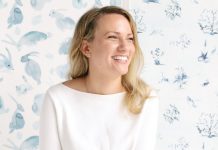