Home Uncategorized Chip Wade Is a Rising Star at HGTV

The tables were turned on Chip Wade, host of HGTV’s Elbow Room. The final episode of season two—a major renovation of The Bert Show host Kristin Klingshirn’s Buckhead cottage—had debuted the night before. And the next morning, Bert Show listeners got an earful with Klingshirn’s own reveal: She was not pleased. But if anyone can match Bert Weiss’s uncanny ability to orchestrate a heated exchange, it is Chip Wade. Like a trained therapist, the thirty-year-old Wade was all “what I hear you saying” and “maybe it was me.” Apparently, starring in reality TV makes you good at managing reality. In fact, his likable demeanor and unflappable confidence helped take Wade’s show to prime time this spring (Wednesdays at 8 and 8:30 p.m.).

A third-generation Atlantan, Wade has filmed every episode in the metro area. He grew up in Gwinnett County, where he played center field at Parkview High School a year ahead of Jeff Francoeur. Georgia Tech talked to Wade about football, which he’d never played before, but he chose cheerleading instead—which is how he met his wife, Pauline, whose stunts included graduating first in her class. After earning a degree in mechanical engineering and working briefly with a home builder, Wade joined HGTV’s Designed to Sell as a carpenter in 2007. He appeared on several more of the network’s programs before landing his own show. Each thirty-minute episode delivers a complete renovation, from adding a second story to creating a master suite. Filming for season three starts next month.

» The budgets we’re allocated are exponentially more than any other show. We do renovations at our cost of between $30,000 and $130,000, and that is really more like a $200,000 to $300,000 value. The projects take anywhere from eight days to four weeks. And we have five to six going at the same time. That’s a million dollars’ worth of residential projects going on simultaneously in Atlanta.

» We cast homeowners off of my website, off of Craigslist, anywhere and everywhere. We have thousands and thousands of submissions. I have to clear out Elbow Room’s Gmail inbox every other week because it shuts down.

» We don’t fabricate drama. HGTV is a wholesome network. Their bread and butter is people leaving it on all day. You can’t bring in much ridiculousness and maintain that type of audience.

» We’re not the lottery. We’re not bringing our budgets, our crew, to execute someone else’s vision. Then you could simply do it yourself. What people sign up for is hiring a team that is super qualified to come evaluate their situation and take care of it. Amazing quickness, innovation, and turnkey deliverable. For 99 percent it’s a dream come true. It’s the most surreal experience.

» I try to do at least three very innovative things in every episode. It’s sort of become a stereotype: What’s going to move this time? There was one episode where I did a couch that rotated from indoors to outdoors. (For another example, see multi-purpose coffee table below.)

» I lose interest in doing things more than once. That’s probably not a good business model.

Watch a clip from the June 12, 2013, episode of “Elbow Room” to see how Chip Wade tackles design obstacles. (Courtesy of HGTV.) 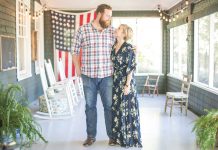 Ben and Erin Napier, stars of HGTV’s Home Town, on their love for Laurel, Mississippi—and each other 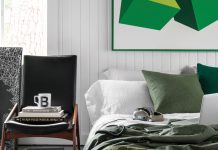